One small part of the allotment has been used as a bit of a dump. The previous tenant certainly used it as that with piles of plastic bags, netting, wood, wire and glass all over it. We have slowly been clearing it and over the last couple of days we have had a big push. The soil that remains, after the junk is removed, is rather nice. I think part of the area was a compost bin and the resulting compost seems rich and fine. The ground is uneven, so when we have dug it all over we will need to level it. It is currently outside the rabbit fence, so before we can do anything useful with it we need to move the fence.

All of the plots are being well looked after now. When we moved in last year there were a few abandoned-looking plots, but they have all been taken on now - except one. There is a guy in the middle who only grows stuff in old oil drums. The rest of his plot is overgrown with weeds including mare's tails which are very hard to get rid of. I heard last week that the council have asked him to leave because he is not keeping the plot up to standard. Today someone was moving his greenhouse, so I guess he'll be gone soon. 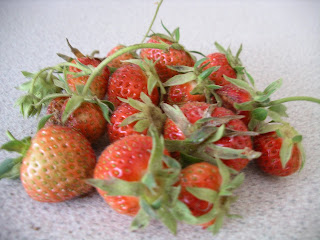 We had a pleasant surprise. There were some ripe strawberries. They are the sweetest berries I've ever tasted, and so many more to come.
Posted by Chris Hill at 16:10