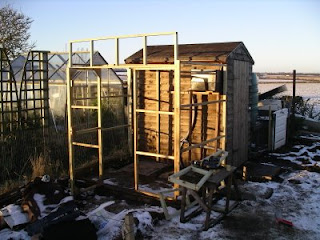 Over the past few days we've popped up to the allotment a few times to rebuild the greenhouse. I wanted to make it bigger so I took down the existing, rather successful one and set about making a new one in the same style. I reused the front side panels and the door and made new, bigger sides. The frame above the door is a little higher now so the slope of the roof will be preserved. The water will run off into the gutter on the shed to add to the water in the tanks behind the shed. The floor area will be about the same as the shed and should give us enough room to grow all we want. The frame is pressure treated one-by 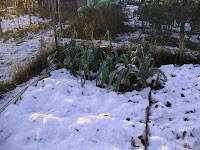 -two, which is thin to be light weight and allow lots of light in. We will cover the side and roof with plastic sheets which are easy to cut to size and add a huge amount of strength to the whole structure.

There has been a bit of snow over the past couple of days, with a bit more forecast. There has been much less of the usual guff on the TV about arctic weather and yet actually this winter is earlier and colder than for many years. I've been slightly worried about the plumbing for the water system, but the lagging seems to be working. When I get the plastic sheets on the greenhouse that will restore the heating of the pipes to make that much safer again. 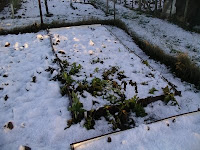 The parsnips and leeks are still going strong - some say frost sweetens parsnips, so we'll see next time we take some. The leeks are standing up to a bit of snow, but the main problem with the parsnips is that their tops have withered so finding where some of them are is getting harder, snow or not. They are also frozen in so digging them up without breaking the root is tricky too.
Posted by Chris Hill at 15:45