... must come to and end and so it is with our raspberries. Our bumper harvests look to have run their course, we took the nets off today so any berries left are for the birds. We picked another 250g of gooseberries, a few runner beans and a few mange touts. I'm much more impressed with mangetouts than with runner beans, so next year the runners will be off the list, mangetouts will be on, but grown a bit earlier and in greater number and maybe a few dwarf french beans as an alternative to th ever popular broad beans. 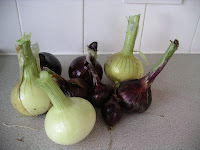 The red and white onions are both having their tops keel over so I've started pulling some more. We use a lot of onions so we just use them without much ado, but I'm going to try drying the next batch of white onions to keep them a bit longer. This seems very early according to people used to growing onions who expect them be in the ground until the end of August at least.

The next batch of garlic is also beginning to whither so that will be ready to pull up soon. Fresh garlic is just so different from the stuff in the shops with a mild, sweet and fresh taste.

Another courgette completed today's harvest. We planted a few winter cabbages which were left-over from Norman's planting. They should be ready by about December. I'll be able to prune all of the fruit bushes now and pull out the ones we don't want. Half of the raspberries will go to a good home. Once the strawberry runners are established I'll move them to a new spot too.
Posted by Chris Hill at 15:49