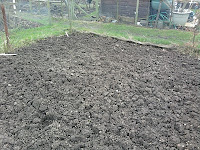 Jean continued to dig over the plot. We guessed she has probably done about 30% now. The soil is damp and breaks up nicely without being too sticky, so it seems a good time to be digging. We haven't finalised the layout of the crops this year yet - we need a plan. I have added some blood fish and bone to one area Jean dug over and to the asparagus bed but until I know where things like carrots and parsnips are going I'll not add any more because they don't like it. 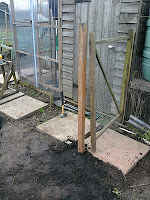 I repaired a gate that was spare and fixed it to the shed. Then cut a gate post from a suitable piece of tanalised timber, dug a hole to mount it in put the post in and back-filled the hole. This gate post is going to form the start of the new fencing. It does look as though some of our fencing is past its best, with holes and tears in some of it. Some of the fencing was on the plot when we arrived and it looks as though we need to replace it. I think I'll use fencing that is not so high on some parts so we can just step over rather than needing gates. This works well for other people.  When we were leaving I looked closely at the old fence and found two holes which are easily rabbit sized, which explains how they exited from the plot when they vacated their warren. This all needs to be repaired before we can plant any new plants. When we foolishly planted some sweet peas outside of the protection of the fence in a previous year they where eaten to the ground the next day, so rabbit proofing is important.

The village has the first signs of blossom showing, crocuses are out in the verges and daffodils are rapidly pushing up. On our plot the blackcurrant and gooseberry buds are opening up and the rhubarb is starting to push through. We'll see if there are any raspberries that have survived - there do look to be a couple of canes with buds. The strawberries have suffered by being half buried by the excavations made by the rabbits, but some should be fine.

I'm looking forward to getting some stuff in the ground, but as always the preparation is important and that's not finished yet.
Posted by Chris Hill at 16:17

Looks like you've made a great start to the season! I bet you are well chuffed.