A flood of leeks 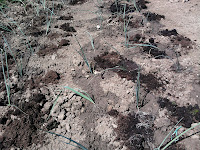 I'm not sure what the collective noun for leeks is, but a flood of leeks sounds quite good in a pun sort of way. Anyway, we planted a flood of leeks today. It was more than half of the leeks we have in the greenhouse. The space I had reserved for them was too small, partly because Jean spaced them more widely than I would have done and partly because more survived the processes of potting and growing on than we expected. We now have to find a home for more leeks, that might involve giving some away. A flood of leeks is also appropriate for the amount of water needed to settle them in. We plant leeks, like most people I think, by making a hole with a dibber (the sharpened handle of an old hoe in my case) popping the leek in the hole and filling the hole with water rather than earth. Today the water just ran away in a second, so we used rather a lot. 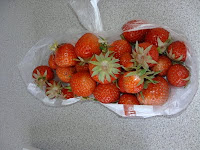 The first of our strawberries have ripened. I put a frame over them with a plastic mesh on it to keep the birds off, sadly something got in and nibbled a few of the most ripe, most succulent berries - I suspect a mouse. One thing about the very dry weather is that slugs are not a problem this year. The strawberry patch is looking quite full, so I'm going to extend it a bit and use the runners from this year's plants to populate the extension. I might go mad and add a frame around it to just mark out the space. The removable frame would need re-sizing or perhaps a extra one adding to keep the size manageable so I need to think that through. I can do that while munching on strawberries later.
Posted by Chris Hill at 16:59