A very useful visit to the plot this morning gave us half a kilo of broad beans (out of their pods), another half kilo of gooseberries, some mange touts, a big bunch of sweet peas, our first spring onion, two courgettes and the army arrived but too late. 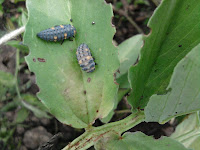 The broad beans have caught up a bit but they have still not produced as many pods as in years before. Some of the plants were so badly attacked by black fly that they had no useful pods on them. We have taken the last pods only to find the plants were covered in an army of seven-spot lady bird larvae. They should much through the black fly, but they arrived too late for the beans.

The gooseberries are all ripening nicely. There will be loads more yet, they are just a pain to pick with the thorns being carefully positioned to defend each juicy berry. Some more mange touts were ready with the plants growing nicely having recovered from the partridge attack. I wonder if ladybird larvae will attack partridges.

The courgettes have responded to the water we have given them, and some rain has helped. The first two fruit were ready with more growing. The spring onions are doing very well, so we took one to try. I also dug up the first garlic, but the stem was still too hard so they can stay in the ground to fill out some more yet. The French beans are growing well, but they are not quite big enough to pick yet.
Posted by Chris Hill at 21:53