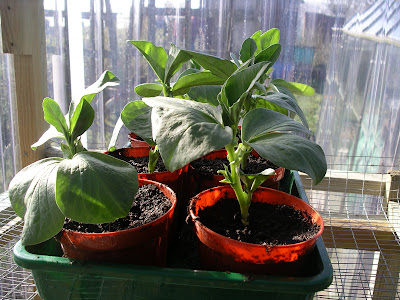 A really lovely day drew us up to the allotment. Rob was there tidying up and Gary had been up with Rob's Rotavator, so his plot looks ready to go. The broad beans in the greenhouse are really ready to plant out, but there is a frost forecast so we'll leave them another day or two.

We dug over the plots for broad beans and where we want to plant some spinach. I moved a few garlic plants that were going to get trampled. The newly planted garlic has also appeared, so we should be fully vampire-proof this year.

The rhubarb is bursting out, though one of Rob's rhubarb plants is much further on than ours. Last year I covered some of the rhubarb to try to force it, but it didn't seem to make much difference, so this year I left it alone. We tidied up and weeded the strawberry beds, where I found a spiny plant that looks like a new gooseberry plant. I planted it near the gooseberries and I'll see what is grows into. The gooseberries and blackcurrants are bursting into leaf. We weeded the asparagus bed, but no signs of life there yet.
Posted by Chris Hill at 16:04