We've been up to our plot a few times recently for all kinds of jobs. The broad beans that we left for seed have started to ripen. We've pulled some and dried them in the greenhouse. There are plenty more to dry yet. Even if we don't need them all we can gather them and give some away. Maybe the new plot holders will want some. 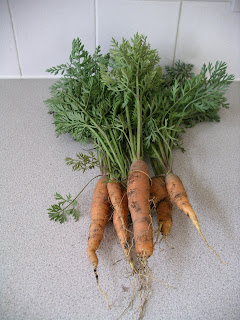 We pulled our carrots today. There were only a few, but they were delicious. I want to grow more carrots now. We have really struggled to get them to grow, so next year we might try chitting the seeds and planting them out much like we do our parsnips. Carrot seeds are much finer than parsnips so it might not work, but worth a try.

Jean has planted out more beetroot to replace the ones we have taken. She sowed some seeds for more beetroot. We're not sure how they will do as the summer wears on, but by planting it out we will eventually find when to stop for another year.

I have been drying onions and garlic. All of the garlic has been dried and tied into strings to hang in the shed until we need them. Apparently the best way to stop them sprouting is to keep them warm for as long as possible. Growers and retailers chill them and then when they get warm they start to sprout. Of course they don't mind if they don't keep at home so you need to buy some more. We have been pulling the white onions as they keel over then drying them gently. I've taken the dried ones home and stored some in a cupboard and some in the garage. There's still a quarter to pull up yet. 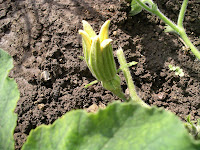 I pruned the squashes. They have runners with the flowers on which need to be pruned to put the vigour into the fruits. The fruits are developing nicely, but not as well as some others on the site. Gary's squashes are good and Kim's are even better.

It looks like the mangetouts are all finished. The plants we grew later have been poor, so next year we'll make sure they all go out early.
Posted by Chris Hill at 18:49