I fitted the new tap - a bit fiddly but otherwise easy. The flow from the tap seems fine and it's much easier than using the old tap which was really a stop valve for a washing machine. I've made it so that I can remove the tap completely in the winter so frost is not a problem.

Jean has now weeded the plot from end to end. There was quite a lot of weeds, but because there has been no rain they haven't sprouted like they might. If the forecast rain ever comes we should have made some inroads against the worst of the weeds.

The plants in the greenhouse are sprouting. The beetroot has started to show and the parsnips are now showing leaves. Sweet peas are going great guns - we might have to plant them out soon, so I need to build the wigwam frames that I'm hoping they will climb. Outside the spinach is OK, the broad beans are beginning to really thrive and the garlic is growing well. Last year we planted some winter onions which I think are supposed to be ready in the next couple of months. They are fattening up, but not showing any signs of a bulb yet. I've not sure how long they will take to form. 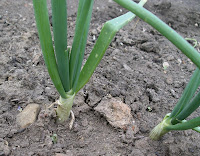 Last year we stuck some cuttings from the fruit bushes into the ground and most of them seem to be growing. This is great - we really want more black currants. Things are a bit later than last year, but I think we were in a hurry
Posted by Chris Hill at 16:18