May has finally turned into spring rather than late winter. The temperature was up and so were the weeds. A bit of weeding, still more to do of course, and a couple of courgettes went out. I covered them with a net which we have not done before. So much stuff has been eaten by the local wildlife that I thought it was prudent. As well as watering in the courgettes we watered the asparagus and beetroot. The beetroot was definitely flagging in the sun.  I added some bark chippings around the strawberries, which are covered in flowers, secured a stray raspberry cane and cut another couple of bunches of asparagus. 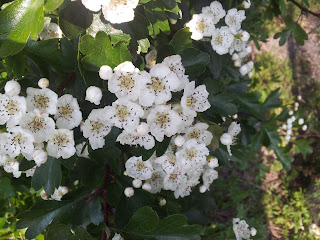 The hedge between plot 18 and the field would be much better if it was all hawthorn, but much of it is straggly elder with some gaps. It is also a reservoir for weeds, especially bind weed and cleavers. The small hawthorn bushes are finally in bloom. The flowers are also known as may flowers but I would normally expect the may a little earlier in May than this.
Posted by Chris Hill at 17:10