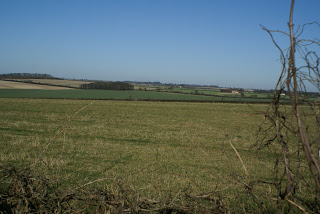 The hedge that borders our allotment is now a bit tidier, though it is mostly old elderberry bushes with gaps rather than the hawthorn elsewhere in the hedge. I would like to make a better hedge, but I don't want to obscure the view, you can see why ...
Posted by Chris Hill at 18:37 No comments:

We got a letter from the parish council clerk about the allotment. It reminds people that rent is due in April, so if anyone wants to give up their plot, now would be a good time. It goes on to remind people that the site should be kept weed free and well manured. It then mentions rubbish against the hedge that should be cleared and that another inspection will be taking place in six weeks.

The Clerk to the council is new to the job, but she has certainly ruffled some feathers. Our plot was a jungle last year when we took it over and under the bindweed and nettles there was a lot of rubbish. This included mountains of plastic netting, torn and useless membrane, metal cages and worst of all loads and loads of glass, mostly broken sheets from window panes. We took the glass to the local waste tip last year (scratching the car badly in the process), but the rest was piled up against the hedge. We took this to the tip today as two full loads in our new trailer.

I resent having a veiled threat in a general letter. If there was something wrong, a note or a phone call would have been much better. The fact that all of the rubbish was left over from the previous tenant annoys me even more. I'm also concerned that the clerk thinks that allotments need to be maintained to the standard of a stately-home garden.

The ground is drying but the forecast is for heavy rain followed by frost and maybe even snow. I have planted some Holly seeds outside in a pot and some frost should stratify them. I want a few different trees to plant in the hedge to add diversity and suppress the elderberries. I planted some hazel nuts last winter, having being told that they were hard to grow. Every one came up, so I'm going to pot some on for a hedge. I also have some oaks, whitebeam and rowan, but I don't think oak is a good idea in the hedge.
Posted by Chris Hill at 16:22 No comments:

The greenhouse attached to the south side of the shed has had an enduring problem. The corrugated plastic roof and sides leave gaps at the joints which allows a cold gale to whistle through. I resolved to sort this out today. A combination of trimming the roof exactly to the edge, adding overlapping cladding and a bit of gaffer tape solved the problem. Without the draft, the inside already felt cosy. A few shelves to come and the job's done.
Posted by Chris Hill at 12:44 No comments:

Email ThisBlogThis!Share to TwitterShare to FacebookShare to Pinterest
Labels: shed

Today we laid out a plan of what we want to grow and where to put it. It didn't take very long and the plan just fell into place. I think it's mostly because we had discussed it on and off over the last few weeks. I drew a plan to check it out, which is below. We then went to the Kenilworth road allotment society to renew our membership and see if they had any seeds.

Renewing our membership for the year was the sting. I had to pay the full adult price of 50p. We then looked at the seeds they had. We got every kind of vegetable we wanted, except the asparagus which I expect to buy as one-year-old plants. The seeds all had prices marked as usual, but they knocked off 25% for members, so my 50p membership saved me over £4 on the seeds.

Now we need to work out the schedule to plant them and the excitement of seeing them sprout can begin.

The water tank in the greenhouse that catches the rainwater at that side of the shed is full. There was condensation on the greenhouse roof above it, so even with no door fitted there must be enough temperature difference to lift some water. The tank should help to keep the air moist in the greenhouse and could provide a supply for some watering system, maybe capillary matting, we'll see what is needed.

The tank at the greenhouse side is small - it's a header tank for central heating. It is connected with plastic pipes to the two main water butts at the back of the shed. I put them as high as I could under the eaves of the shed so they catch the water yet the height gives a little pressure from a connected hose. When the tanks are full it works, but as the level of water falls, so does the pressure. Fetching water is tedious; we are about as far from both water sources as we could be.

I surveyed the burrow we found yesterday. It is much bigger than I thought, with more than one entrance and each hole quite big. There is a heap of spoil in the field behind the next allotment. It really does look like rabbits, so it's a good thing we took the advice to enclose our plot with a wire fence. The field behind was a hay field last year and looks like it will be again, so maybe the rabbits will be fairly happy in there and leave us alone.
Posted by Chris Hill at 15:31 No comments:

Today's visit was to drop off some stuff.

Firstly, I took the frame I've made as the door for the greenhouse I've built. I checked that it fitted as the rain started to fall and decided to leave it for final fixing until a dry day. The greenhouse is a simple affair, built on the south side of the shed, it's only small at about 600mm wide, so more of a tall cold frame than a real greenhouse. The sides and roof are covered with corrugated plastic over a treated wooden frame. When the door has been hung it will be covered with the last of the plastic. This should make a great place to bring on plants in pots or trays before they go out. I think I'll make a low cold frame for hardening off plants as well. The shed already gets a lot warmer than the outside air - even in a wet Yorkshire January, so the enclosed greenhouse will be even warmer much of the time.

One problem with greenhouses is that they lose their heat at night, but one built on the side of a dark brown shed will warm the shed by day and be kept warm by the shed by night.

Jean took a bag of garden cuttings for the compost heap and made a surprise discovery. When we cleared the site last year there was a burrow of some kind tucked away in the nettles under the hedge at the end next to field. It has reappeared, but not quite in the same place. The burrow looked as though it had collapsed in and when we stood next to it more of the ground gently collapsed into the burrow. It was big enough to be a rabbit hole, but there has been talk of stoats and feral ferrets, so I'll try to suss it out.

We quickly measured the plot to make a drawing of the layout as the rain drizzled down. I'll upload the drawing when it's ready. We needed to work out what to plant so I thought a drawing would help to firm up a real planting scheme. We have a few ideas, including creating an asparagus bed, and the drawing will help us understand what really will fit, as well as when things will be in the ground.

We need to get another couple of trailer-loads of horse manure to prepare the asparagus bed. There is a large riding school and stable in the village and they have a large excess of manure. They pile it into a huge heap, which makes it rot quickly and thoroughly into wonderful compost. Last October we collected many trailer-loads of this stuff and spread it on the newly cleared ground but now it has disappeared, dragged down by earth worms. I want to dig lots of this into a bed for asparagus which I'll buy as plants not seeds.

That's the plan anyway.
Posted by Chris Hill at 19:17 No comments:

Start of the year

So, the new year rolls by and the quiet time on our allotment idles along. We made a quick visit today, our first of the year, to check things over. All was well; we picked a couple of cabbages which together might just make a couple of servings. They are the remnants of the very late, cabbage afterthoughts that Rob gave us last year, but they taste good. The spinach is small but growing so it should be some use once the growing season starts. The garlic is sprouting rapidly - I hope it's not too early since there is lots of opportunities for frost yet. We might get a couple of meals from the last of the leeks - more of Rob's gifts from last year.

The ground is very wet and our newly dug and enriched soil is muddy (claggy in local parlance) but it will dry a little soon. I don't expect to have to work the ground much for the next few weeks, except perhaps pulling the odd weed. The bindweed that the site was covered in will still make appearances as the year goes by and it seems that the only way to deal with it is dig it out as it appears. When I say covered with bindweed, I mean it. There were two small plum trees on the jungle when we first took it over last July, but one was so completely hidden by bindweed that it was a couple of weeks before we even knew the plum tree was there. The space that was not covered with this climbing menace was waist-deep in stinging nettles.

The cuttings we took from blackcurrants and gooseberries look as though they have taken, so our fruit bushes should improve over the next couple of years. The raspberry canes are surviving the winter winds, aided no doubt by being tied to the wires I put up last year, and by being pruned and free of the blanket of bindweed. Norman gave us some (loads of) strawberry plants which were cut from his runners. They seem to be surviving the winter - I'm just not sure how well they'll do since they are not in raised beds.

The exciting time of planting seeds is fast approaching, then the work really starts.
Posted by Chris Hill at 12:20 No comments: