Our first seeds of the spring are sprouting, and very welcome they are too. The beans and leeks are beginning to show, though they are still very small. The leeks carry the seed case for a few days, before they finally crack it open to reveal the first leaves. 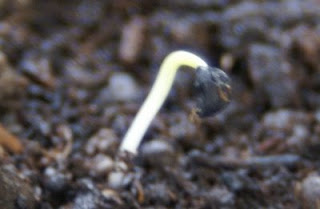 The beans will push a bundle of leaves up quite quickly, they have more resources available from the big bean seed.
Posted by Chris Hill at 11:53 No comments:

We had a visit from the shelf elves. This lovely pair of shelves are sitting in the greenhouse, just waiting to be filled with trays and pots. Well actually a couple of hours work and a mug of tea later we had finished building the long shelves.

Jean planted the extra garlic in a little corner near the asparagus. It wasn't on our plan, and it is already looking like the plan is broken. We have winter onions which we didn't originally expect. We have extra blackcurrant bushes as cuttings. Our broad bean patch is going to be smaller than first planned and the dwarf beans are off the list altogether. I still think the plan was a good idea because it made us think about what we want to grow.
Posted by Chris Hill at 18:58 No comments:

The weather has suddenly turned much warmer so seed sowing has started. We have planted some broad beans in pots. Learning from last year, we are planting far fewer plants this year since we were overrun with beans last year. We are also only planting one in each pot and starting in bigger pots. The aim is to transplant the young plants into the row where they will grow at just the right time. Last year we planted the first batch out when the plants were lanky and soft. We planted the last batch out much too late and they didn't really do much. We have many, many times more seeds than we need, so I'll see if my sister and here children want some when they visit later this week. The beans are saved seeds adapted to our northern climate, but they should do well in Kent too.

We have also started our first batch of leeks. Spreading the planting to extend the season does no good what so ever with long growing plants like leeks, but we spread the planting a bit to lessen the load of plant trays and to not keep all of our eggs in one basket. We want more leeks than last year if we can, we had finished all of ours before the end of the season and could easily have used many more. We also took a few when they were small - very late planted - and they were very good raw too.

I need to get the shelves in the greenhouse finished so we have space for the young plants. Our method last year was to plant almost everything in trays or pots and then to plant out as strong plants that don't need to be thinned. The plants were mostly sown at home and as soon as they sprouted they were moved to the greenhouse. It worked well, even though it goes against many people's ideas and against the instructions on the seed packets. We'll do it again this year.
Posted by Chris Hill at 15:12 No comments:

We had a very quick visit to see just see what's what. The ground was frozen hard with a few pockets of snow lying around. The temperature was about freezing. The water pipes have survived so far, in fact there was liquid water on the tap. I am very impressed by the effect of having a greenhouse on the side of the shed. The greenhouse gathers the heat even on a dull day and warms the shed that, I think, gives that heat back at night. It was a dull day and the sun had only been up for a couple of hours but the greenhouse was about four degrees (Celsius) warmer than outside.

The winter onions are still green, but seem to be not growing at the moment, the ground is rock hard. Garlic, however, must be made of sterner stuff, some new shoots are showing. The extra garlic we bought last month now does seem to not be needed, but we will plant it; lots of people use garlic so if we get too much it will be easy to give away.

I has started snowing again, but the forecast is for the temperature to rise in a couple of days. We might, at last, be able to sow some seeds.
Posted by Chris Hill at 12:51 No comments:

Today we went to the allotment society in Kenilworth Avenue to see what seeds they had. We had a list with the plants and variety we would like. We got most stuff but no dwarf french beans. I'm wondering if we should leave them for another year, plenty of time to decide yet. As usual the seeds come with a 25% discount to members, so my 50p membership fee saved me £4. We also saw a mini greenhouse, which has four shelves covered by a plastic skin and a zip-up door at the front. We have one at home already, but the plastic skin is cracking and one of the shelf supports has broken. It really is a great thing to have against the house wall. It lets us harden off plants in a small space. The new one will probably get used alongside the old repaired one, which we have had foor many years and overflowed last year.

There is a heavy frost forecast for tonight. It could get down to -10°C, which is unusual here. It has been unusually cold for the last week or so, so the winter rain has fallen as snow. We have not seen too much snow, though there may be more to come. The forecast for a very sharp frost has prompted me to drain the water pipes on the allotment tanks so the pipes don't burst, I hope it works. The water in the tanks should be OK, they can push the lid off if needed and they have old plastic bottles in them so the ice can crush them as it expands and not burst the sides of the tank, hopefully.

The very cold spell, which is forecast to continue for a couple of weeks yet, means we have delayed planting any seeds. We would have planted our broad beans by now, but they will just catch up later.
Posted by Chris Hill at 16:24 No comments: