Yesterday the first batch of autumn digging started. There has been very little rainfall this year, but lately there has been more rainy days, so I expected that the ground would quickly become a muddy mess, as usual at this time of year. I was wrong. The rain we have had has not soaked the ground at all, so digging it over was easy and the resulting tilth was lovely, crumbly, damp soil not great clods of mud and not dry, unbreakable lumps either. In fact it seems almost perfect. 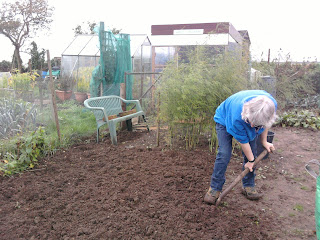 We now have enough ground turned for our onions, spring onions and garlic to go in, but first it wants a bit of blood-fish-and-bone raked in to give the onion sets and garlic cloves a good start. The spring onion seeds need really fine soil so an extra rake over there is needed too.

The next spot to dig will be a space to plant broad beans to stand over the winter as an experiment. If that doesn't work we will just plant broad beans in the spring as we have done before, so there's no risk of not having broad beans which would be a big loss.

All of this is using up space when we haven't yet planned out the layout for next year. I will make a plan up, but as usual it will only be a starting point rather than a strict plan.

The extra rain has helped our leeks a lot. They are still not as big as last year, but they are doing well now. They were covered in rust earlier on, but now that seems to have gone. Reading about rust on leeks has left me feeling that people may have mixed their ideas about it. It's called rust because it is small, rust-coloured spots on the leaves. People equate rust on iron with water, so I think people have followed that thinking through to leeks, but I think that is wrong. The rust was there this year, and last year, during the dry spells. When there was plenty of rain it disappeared, so I think leek rust is a disease of dry weather and not wet as my books say. This time last year we were already taking big leeks, we will start taking some next week I think.
Posted by Chris Hill at 11:48 No comments:

Today we bought some onion sets and garlic. The onion sets were fifty each of white and Japanese yellow which should be planted about now. The garlic will be ready to be planted in a couple of weeks. We want to try growing some spring onions over winter too, so  the seed needs sowing while the ground is still warm.
Posted by Chris Hill at 21:08 No comments:

The crops on the allotment have been a bit poor generally. The extreme lack of water through the whole year has been broken to some extent recently, but still much more water would be welcome. The leeks are beginning to fill out, but they should be twice as big as they are by now.We'll start to take a few leeks soon but even though we planted more this year and that almost all of them have grown we will have less to eat because they are so small. They also have a bit of rust.

The sweet corn is delicious, but many of the cobs have not been fully pollinated, so some of the kernels have not swollen. I expect to grow sweet corn next year, but I'll have to improve the pollination rate. I have read that the male flowers on the top of the stalks can be cut off and the pollen introduced to the female tassels, so I'll try that.

We have continued to take courgettes and beetroot, both are good, but the courgettes have not been as plentiful as expected. The tomatoes are almost done. They have been good and they were spared the drought by being watered in the greenhouse almost daily.

It's time to start thinking about the winter crops and any changes in the layout. Winter onions and garlic are certainly on the cards again and we will try growing spring onions and broad beans over the winter too.

We are planning to move the fruit bushes to the back of the plot and digging up at least half of the rhubarb. I'm also thinking about moving the fence so the fruit bushes will be outside of the fenced area. It should make access to the compost bins easier. Moving the fruit should give us much more space on the very best soil too. I hope the weather lets us make the most of it next year.
Posted by Chris Hill at 18:17 No comments: