I sowed some leek seeds today. Roll on October and fresh leeks.
Posted by Chris Hill at 20:35 No comments:

The first broad beans have pushed through the soil in their pots. I need to keep up with watering as the pots are a bit small. No sign of any parsnip roots yet. Everything seems a bit slow this year.

In other news, I've started the parsnip chitting process for the year. They are happily sitting on damp paper, waiting for their root to appear before they get potted on.
Posted by Chris Hill at 20:59 No comments:

The parish council, from whom I rent my allotment, have written to me again to confirm that they intend to pull up about 70m of hedge and replace it with what they call a secure rabbit proof fence. The site is a rectangle, with the northern and southern boundaries being about 80m and the eastern and western about 50m. The southern boundary has two entrances in it, one at each end, which are open. I have walked the length of the northern boundary and I can plainly see two rabbit holes, but there may be more hidden from view amongst the stuff on people's plots.  Across the road from the southern boundary is some land surrounding the Water Tower which is not cultivated nor obviously managed. There are rabbit holes there and rabbits have been seen running across the road from the allotment site to take cover in there. 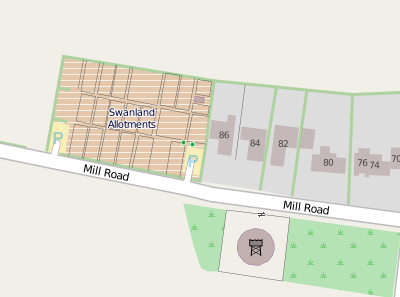 The plan now is to grub up most of the existing hedge along the northern side of the site, dispose of the rabbit holes, build a secure, rabbit-proof fence and then next year, replant the hedge along its existing line.

Why will fencing 80m of the 260m boundary prevent rabbits entering the site?

When the main reservoir of rabbits seems to be to the south not the north, why is a fence being proposed to the north?

Do the parish council know they cannot remove a hedge without permission from the county council (1997 Hedgerow regulations)?

Will any nesting birds be disturbed by grubbing up the hedge, contrary to the 1981 Wildlife and Countryside Act?

What other steps have the council taken to minimise the disturbance to existing wildlife (other than rabbits)?

Why did the council press on with this without seeking any consultation with plot holders about this?

Is putting up this secure, rabbit-proof fence really a good use of public funds?

Will funds to replant the hedge next year really still be available?

When the job is done and the money spent, if we still get rabbits on the allotment site who's head will roll?

I would like to see the back of the rabbits. I would like to see the hedge improved, especially elder replaced with, say, hawthorn. I'm just not sure that the upheaval of grubbing out a hedge in the spring, the nesting season, replacing it with a fence and hoping a new hedge gets planted next year is the right way forward.
Posted by Chris Hill at 16:08 1 comment:

Rabbits are not so smug now

I went up to the plot to find it very wet after the weekend's torrential rain. There's water standing in many fields around the village and the cold is not helping shift the water. The sap should be rising in some trees now which makes a big difference to the wet ground, but winter wheat is waterlogged and not growing at all well.

Plants growing is the main way water gets moved out of a lot of the ground. They suck it up into their leaves so some water molecules get an electron stripped from it by photons from sunlight to start the generation of sugars, mostly from water and fresh air (CO2). The water that keeps its electrons is passed out, alongside some oxygen from the broken down water molecules, in a process known as transpiration. This sucks yet more water from the roots, which dries the ground a bit more.

Once I had decided the ground was still to wet to walk on or even dig over I looked at the rabbit hole behind, and under, my compost bin. I looked abandoned. There were no new dropping and no sign of digging. I filled it in with the pile of soil the rabbits had dug out, adding a few big rocks for good measure.

As I did this I heard a familiar sound, the keewik of a buzzard. Across the field there is a copse and sitting on a branch there was a buzzard, quickly joined overhead by another one. I'm hoping they nest there and then they can feast on their favourite food: rabbits. They would also take rats which would also be a good thing for us plot holders.
Posted by Chris Hill at 15:51 No comments:

I've made a very late start this year, but given how cold it has been I don't think that is a mistake. I have begun clearing up the plot ready for a dig over, but I'm waiting for the frost to go first. I want the soil to warm up so digging frost deeper into the ground doesn't sound like a good idea to me. Maybe I'm wrong though. The other reason to wait a little is that the very cold weather has left the melted ground very claggy so walking on it is harming the soil structure. It needs to warm up a bit and let the beasties in the soil work their magic.

Our new plot holders have got off to a start turning over their plots. It is certainly a better time of year to take over a plot than when we got ours in June. I wish them well. Let's hope the weather and pests give them a break this year.

I've sown some broad beans in pots and as I came inside the sky darkened and it looks like rain, so just in time.

No further word about fences, hedges or rabbit warrens and no sign of activity. I suspect reality may have taken hold, but we will see.
Posted by Chris Hill at 15:59 No comments: