Digging, both Human and Leporid

Plot 18 needs its yearly makeover. The soil needs turning and weeding ready for the planting to come. If the weeds are removed now they don't get a hold as the weather warms up. The digging has begun with about a third of it complete. The soil is lovely to dig - but not at all like you would expect at this time of year. It is soft, fine and crumbly whereas you would expect it to be heavy and in sticky clods. I think some of the texture is due to being carefully worked now for some years and left untouched over the winter. Some, however, is due to the very dry winter. The ground is damp, not wet and without a lot of rain we will be back the watering regime of last year.

I have also moved the fence to surround the raspberry canes, what's left of them, and protect them from the rabbits. In the process I found an extended rabbit hole which had come up through the compost bin. I filled it with rubble to make it as unpleasant as possible, but I think our skirmishes with the local rabbits looks like continuing. Geoff, the parish council chairman and neighbouring plot holder, suggested finding someone with a ferret.

On the positive side the rhubarb is beginning to appear, the gooseberries are covered in buds and a few are opening and the blackcurrants look weighed down with buds. A few wayward raspberry canes also appeared and they can be moved to supplement the gnawed remnants now inside the fence.

It's good to get in touch with the earth again.
Posted by Chris Hill at 16:38 No comments:

Broad beans are in their pots. 24 Bunyards Exhibition beans, one per pot, are now being willed to sprout. Let's give give them a week or two.

Last of the leeks

We just dug up the last of the leeks. There were a few soft ones that went straight to the compost, but most looked great. There were signs of rabbits all over the place, but none inside our fence. When the ground is ready we will alter the fence to take in the raspberry area and add a place to store our frames between uses. Seed planting time is fast approaching - I can't wait.

There's been snow on the ground for a few days and hard frosts, so the leeks that remain at Plot18 are frozen in for now. They're getting a bit old now so they really need using before they go woody. Staying off the plot, my attention has turned to buying the seeds for the new season. The solar Spring has started, the thirteen weeks of shortest days are over, so planting time is approaching for some things. I've been out and bought some seeds. 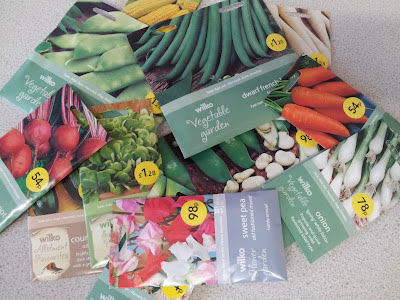 I've changed some varieties this year and there is nothing bold and new, so far, but the planting plan does leave a few spaces to try anything that we fancy. The list is:
In previous years we have kept broad beans as seeds, but last year's crop was not as prolific as in the past so we decided to buy new seeds. There are a few stalwarts in Musselburgh, White Lisbon, Boltardy and Old Fashioned Mix (grown for cut flowers of course). The rest, well time will tell. I might yet buy some different carrots as an experiment and we still need onion sets and some new raspberry canes.
Posted by Chris Hill at 15:21 No comments: