We visited the plot today to get rid of some wood from the hedge bottom. The wood was rotten and went to the newly refurbished local recycling site, which was much easier to use than before. The reason I did this was due to a letter from the parish council, the site landlords, asking people to clear up any such rubbish.

The letter suggested that access was needed to deal with rabbits that were causing problems. Given my battle with rabbits you might expect that I would be happy, but I was not. The letter went on to say access was needed to remove the hedge and replace it with a fence. I wrote an email to say how unhappy I was about this. Removing countryside hedgerows is the kind of vandalism that I thought we were leaving behind. Since the rabbits burrow under the hedge I didn't see how a fence would help. It seems that a parish council meeting had decided all of this and was was setting about it without discussing it with tenants.

I got a reply from a councillor who is also the guy who farms the field at the other side of the hedge. He said the hedge is staying and indeed will be improved by removing elder and replanting suitable species. The fence would supplement the hedge and it would be dug down 12 inches to prevent burrowing under it.

I replied with more detailed concerns, but I have not had any response yet. Let's remember that any action the council takes will be paid for by public money, so they need to be able to justify its value.

Rabbits are a concern, but destroying hedgerows is not going to stop rabbits. The majority of damage to fenced plots was not from rabbits. There are rats, pigeons, crows, partridges, mice, slugs, snails, caterpillars and possibly deer all causing problems, rabbits are just more visible than the rest. I believe rats have caused more damage in the past year. The contractor the council asked said there was no sign of rats, even though the council chairman himself found a dead rat on his plot last year, to go with the others found elsewhere on the site.

Let's see what letter arrives after the next council meeting.
Posted by Chris Hill at 16:16 No comments: 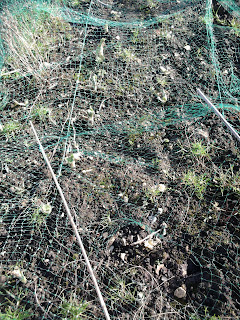 We went to harvest some leeks. I expected there would be enough for one or maybe two more harvests. I was wrong. They were eaten to the ground. The photo is lousy, but you can see they were covered and there is almost no sign of a leek left. Looking around the whole site everyone else's leeks have suffered the same fate - except Norman's. He has covered his handful of remaining leeks with a complete covering of chicken wire mesh. Even then the few leaves that poked out through the mesh have also been eaten off. Something likes leeks. In previous years we have simply protected them with CDs hanging on strings when they were first planted to stop the birds pulling them up, then safely left them uncovered but this year something has changed. There are no tracks to be seen around the plot, there are lots of rabbit droppings in the hedge bottom behind our plot but as far as I can see there is no gap in our fence to let rabbits in. Besides, there is worse to come. 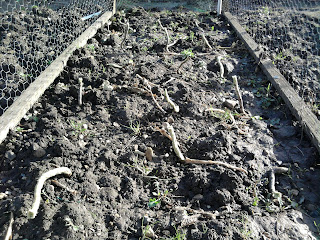 This is utterly dispiriting. Our vegetable harvest for the whole year have been destroyed by pests and once again I think it is rats. Birds would love the leaves of the broccoli, but not the thick stems. The stems have been gnawed through and not a trace of the rest of the plants are left. As you can see the frames are intact, but a the plastic net covering was pulled off and a piece had been gnawed through. This is not birds. There are other plots with cabbages and sprouts not covered up which are largely untouched, yet leeks and our broccoli have been destroyed when they were hard to get to.

I hope the parish council, our landlords to whom we now pay increased rent, will employ a pest controller to deal a serious blow to these rats - we cannot have another year like the last one.
Posted by Chris Hill at 12:14 2 comments: