A couple of days ago we planted the garlic for next year. It can be a bit awkward planting stuff at this time of year, because it is usually in the ground the following year when you are ready for planting more stuff. In previous years I've had a plan to work to, though the plan rarely survives long before something changes.

This year's garlic planting has used a bit of the plot we have ignored before, next to the asparagus, so it shouldn't get in the way. I will think about a plan soon. That involves looking back at what worked and what needs to change. I do enjoy reflecting on the goodies we have had and looking forward to what we can grow next year.

More leeks, carrots and parsnips came home with us. Parsnips are very good this year. We will be blanching and freezing some more before the ground freezes.
Posted by Chris Hill at 22:08 No comments:

Thanks to the French beans 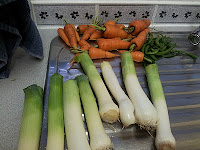 The French beans have given given us their last crop. The leaves had begun to shrivel so we dug them up. We took some carrots and some more leeks too.

The parsnips looked good so we dug a couple. They looked particularly good, clean with no canker, a good size and shape. We ended up digging some more and blanching and freezing them for later. The idea of keeping them in the ground until you're ready for them has not worked too well in the past. If the ground freezes digging them up intact is difficult and as they sit, largely leafless, the rot and canker sets in. So this year we're going to steadily dig them up and freeze the ones we don't need right away. Frozen ones work well for roasting, in soup and in stews so it is a good option, if you have the freezer space. 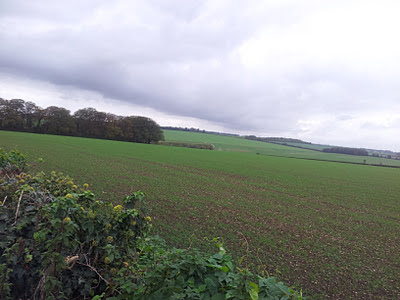 I took a photo over the fields behind the plot, mostly to try out the camera in my new phone. The view never disappoints me; it really is a lovely place to have an allotment.
Posted by Chris Hill at 16:20 No comments:

A very warm spell has wafted over us. The plot had already wound down, but the remaining French beans might just give us another crop thanks to the warmth. The courgettes just missed it, the sweet corn is almost over any way, carrots are fat and probably won't notice, the leeks should fatten up a bit more.

The warm spell might still do us a big favour. The field behind our plot had oil seed rape earlier this year. That is harvested very early and so the field has stood largely empty for a long time, but recently the field has been ploughed, harrowed and planted. This empty spell may be part of the reason we have been visited by rabbits. The warm weather may have come to the rescue, because the winter wheat in the field has sprouted, so rabbits will have plenty to graze on.

I blocked up the rabbit hole with stones, pushing them as far down as I could reach. The rabbits, or something, moved some of the stones, but not enough to uncover the hole beyond. I keep checking the state of the bank to find new scratchings, but no new holes. I hope the rabbits like young wheat, but I expect Martin, the farmer, won't be so pleased as I am if they chose his crop over mine. Any more incursions and I will buy enough wire netting to cover the bank. If I put that on over the winter, the growth in the spring will embed the netting into the bank properly.
Posted by Chris Hill at 21:56 No comments: