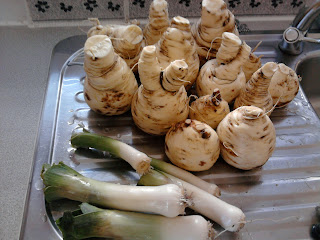 The parsnips this year seem to be woody in their centre. I've come to the conclusion we leave them too long before lifting them, but they also suffered from lack of water last year. It seems that the Met Office are now quoting last year as a very dry year, something I knew at the time but no one else seemed to acknowledge. The annoying thing is that I didn't respond to my own local information and water the plot more. We have lifted the rest of the parsnips and took a few leeks too.

Next year I think I'm going to try planting some parsnips later to see if it makes any difference to how woody they end up being. One thing about the very cold December we have just had is that I know our parsnips have been frosted, which is supposed to make them taste better. They were so frosted that they were frozen firmly into the ground and immovable.

The ground is very muddy, just as I would expect at this time. The plot looks a bit sad and unkempt, especially because the fence is quite a mess. Having seen the damage rabbits can do, both in previous years and again this year I need to repair the fence before we plant out anything new, but there's plenty of time for that yet. At the moment we need to keep off the muddy land to help preserve its soil texture, so moving and repairing the fence will have to wait. The only exception will be to gather the two more harvests of leeks that still remain.

The rabbit hole that appeared in the plot appears to be abandoned - I filled in the entrance and the long-eared leek-scoffers have not dug it out. The entrance that is outside the fence, next to the shed, has been enlarged. I have filled that in, partly by standing next to it and falling into the hole as the surroundings collapsed. That revealed much more of a tunnel heading towards the plot next door, which I'll mention to Rob when I see him. We've had rabbit holes around the plot since we arrived, especially in the bank under the hedge. I don't expect they will leave, just quickly adjust to my measures. If it means they don't eat my crops that's fine.
Posted by Chris Hill at 11:58 No comments: