There was loads of fruit to pick today, blackcurrants, raspberries and now gooseberries too. More mangetouts too. There are a few French beans forming and the sweetcorn are beginning to show some tassels for the pollen to fall onto.

All of us plot holders got a letter to remind us to tidy out plots and keep them free from weeds. I would prefer that if a plot holder is not dealing well with their plot that someone from the parish council contacted them to find out if there is a problem. Sending a letter vaguely threatening eviction seems a pompous way to behave, but that's what I would expect from the parish council.

I will put extra effort into weeding, I would be very sad to lose my plot.
Posted by Chris Hill at 18:50 No comments:

Fruit and a bug

The hot spell has been followed by warm weather with some rain at times - ideal for growing. The broad beans have all come on well with loads of swollen pods. I picked loads of pods today, most will now be frozen for later in the year. The raspberries are producing lovely berries while the blackcurrants are better than ever. Gooseberries are just ripening and in a couple of days there will be a glut of them too. I've made some great blackcurrant jam and frozen lots of extra berries too.

I've dug some of the potatoes, and they are really good, but not that many tubers on each plant. The French beans are still behind, with no pods and only a couple of flowers. The sweetcorn is short and stubby, with the start of male flowers showing, but no cobs yet. I hope there is still some pollen when the cobs need it. Onions look good with no flowers, but they are not turning yet, so they seem a bit late to me. The manges touts have already been prolific with much more to come. It looks like the cold May and June has played a big part this year. 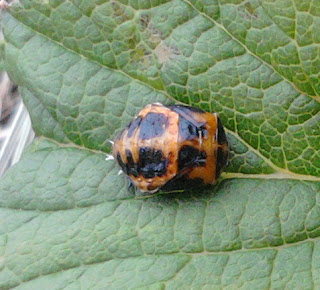 On the next plot Louise discovered a bug of some kind on her blackcurrants, I only managed one decent picture of it. I have no real idea what it is. At first glance it looked like a ladybird, but there's no obvious head or legs. I wondered if it is a shield bug, but again the shape is wrong. It could be a scale insect, but it's a bit big and a bit thick. I wonder if it's the young stage of something.  So I'm puzzled. Louise found three on one of her blackcurrant bushes, I hope they're not harmful.

Edit: I'm reliably informed that it is a ladybird pupa, so beneficial not harmful at all (Thanks Jerry).
Posted by Chris Hill at 19:57 No comments: