Tidy up and broken into

We popped up to check on the state of the plot. We had some plastic uPVC strips that we have built stuff from, but there was a lot left over that we didn't expect to use so we took it to the tip. One of the trees we thought about moving we decided to cut down instead, so that went to the tip too.

Sadly we also discovered that our shed had been broken into. The hasp was broken and stuff inside had been rummaged through, though nothing seemed to be missing. There was no lock on the door, so I don't know why the hasp was broken; the wire holding the door closed is easy to pull out. I expect it was dark.
Posted by Chris Hill at 20:04 No comments:

We planted a few trees around the edges of the plot when we first took it over, not with any particular plan in mind. there were three oak trees, which with hindsight was not the best idea. Two of them have grown to be substantial small trees, crowding out the third. We tried to move one of them which proved to be a lot harder than I expected.

Just dig out the root ball is what the TV gardeners will tell you. What with, a JCB? We dug out what we could, broke two fence posts in the process and had to cut more of the roots than I wanted to but we managed to move it into a gap in the hedge behind the plot. The other, even larger, tree still awaits its movement day.

We have had another round of rabbit hassle, with another hole appearing in the plot, but this time only close to the shed and outside the fenced area. This was filled with stones and a couple of bricks. It looked like it had been dug from below, with no spoil around it, so I'm hoping it was the rabbits' escape route and that by filling it in I have prevented them returning, but we will see. If I have blocked them in they will easily dig a new exit - I just hope my efforts persuade them that somewhere else would be a more pleasant home. 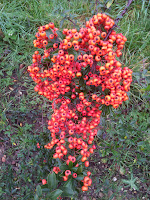 A big pile of cow manure appeared in the car park once again. It is substantially better rotted than the stuff last year, but still it is not what I really like. Too fresh and the ammonia in it causes more harm than good. I decided to not use it this year again. The structure of our soil is pretty good, we can feed the soil in the spring where the crops need it so I think we will be OK without it. The small hedge next to the car park was planted with buckthorn I think and now the berries are splendid.
Posted by Chris Hill at 12:33 No comments: