The hot weather tempted us to check out what needed water. All the small plants were struggling, but the bigger, stronger ones were doing very well. Once we had watered the young stuff we set about picking blackcurrants - nearly a kilo, with still much more to come. We pick the ripe berries individually by hand only when they are ripe. Some suggest we should wait until all the berries in a bunch are ripe then pick them all, but the slow way means we don't get currants in different stages of ripeness.

We have four courgette plants and they are covered in flower buds. A few have started to form into courgettes and one double one was just about big enough to take. It didn't make more than a taste but it was good. I look forward to more than a taste next time.
Posted by Chris Hill at 21:15 No comments:

Yesterday we had to pop up to water the vulnerable young plants, and they needed it. I try to water only the soil, not the leaves, and to get water to the area around the base of the plant not all the area around. This minimises the use of the water, but it also means there is no spare water in the surrounding ground for the plants to dip into. The ground is, once again, bone dry and there is no prospect of rain in sight. We harvested about half a kilo of blackcurrants, some spinach, three lovely beetroot and our first few raspberries. All of the fruit has responded well to our watering with succulent berries.

Today we picked more than a kilo of strawberries, which were delicious (we didn't eat them all, we gave most away). We had some more mange-touts which were really good. If they freeze well I'd be tempted to grow more of them to freeze rather than some of the runner beans. Courgettes are growing well, but are not yet big enough to pick. The runner beans are getting flowers, and so are the tomatoes.

In spite of watering yesterday the beetroot newly planted out were wilting and the smallest spring onions were flagging. The forecast is for hot weather so watering over the next week seems inevitable.
Posted by Chris Hill at 21:43 No comments:

The fine weather tempted us to plant some more plants out. This time the next batch of beetroot and most of the rest of the leeks. The leeks needed holes to plant them in, but the ground was very hard. Our new dibber (old hoe handle) works well in soft ground, but it could do with a footplate to help drive it into harder ground. Once the leeks were in the holes I filled the hole with water. Once I had reached the end the first holes were dry, so I repeated the fill twice more.

We watered the plants we put out yesterday to give them a better start. The courgettes have loads of flowers and a few are forming courgettes, the squashes look fine and the peas look very good, with a couple already finding the string to climb. We gathered some pods from the original mange-touts to eat. Jean took a good batch of rhubarb which looks like being the last for this year. We brought home some of the puny garlic cloves I dug up last week to see what it is like to eat.
Posted by Chris Hill at 21:05 No comments:

The raspberries are showing signs of ripening, and the birds seem interested, so we dug out last year's nettings and covered them up. The nets still had the strings on them and surprisingly none of them reached the ground, s 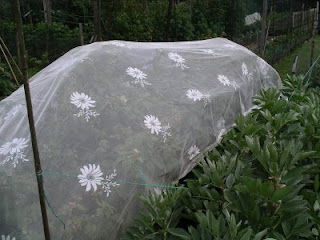 o the canes have clearly grown much bigger than last year. The nets worked well last year - they were the cheapest we could find from Boyes in Hull. By not reaching the ground they let the bees and other beneficial insects in under the netting, yet seem to deter the birds. They don't look pretty, but they're not on very long. They are pegged down at each side, so it's not hard to pull the pegs to get at the fruit, which looks to be abundant and some is starting to ripen.

Jean planted our four squashes out. They came from the BBC Dig In scheme. There were six seeds in the packet and only four germinated, but they look to be good plants, so we'll see how they do over the summer. She also planted our second batch of mange-touts. The first batch have produced a some lovely pods, but not as many as I had hoped, so I hope these do well. I have tied some string over the peas to help support them. I think I'll try to keep the raspberry canes 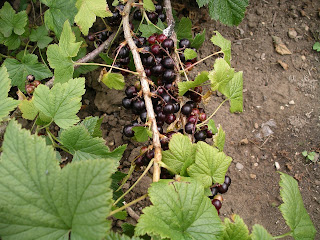 that we prune off this year to use as pea sticks next year.

We have picked the second batch of black currants. The berries look to be a good size so our extra water seems to have helped. There are many more yet to come, but we have enough for our first pie of the year.
Posted by Chris Hill at 20:04 No comments:

It rained yesterday. Hail stones, thunder and lightening, and a great big downpour. The street outside was running with water. Today the sun is out again and our allotment has been well watered by the rain, but not soaked. There are patches of ground that look dry and the soil is only damp below the surface, but it is much better than it was and it was much easier than watering by hand.

Our raspberry bushes are covered in flowers and young fruit. They're also covered in bugs, flies and bees. I grabbed a couple of photos of ladybirds, including this spotty one. I think I'll try another time to get some photos of the wildlife to try to see just what there is. Today, as well as the ladybirds, I saw some bees and hoverflies but I'm not sure what kind.

I tried to remove some of the bind weed that we still appears between the raspberry bushes. In the process I stood on an onion, so we pulled it up to use quickly before it goes soft. It's a yellow winter onion and they look as though they will be ready soon. They have been easy to grow and I like the look of them so I'll probably grow some more over the winter again. 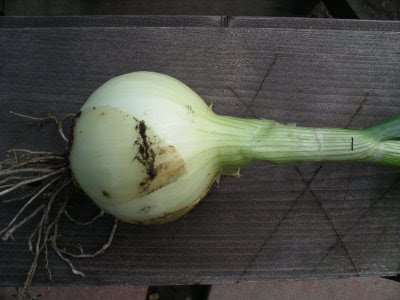 We popped up to tidy up, plant a few things and water everything. The ground is dry, dusty and crusty. I pulled a few weeds around the strawberries and found our first ripe one. Half each didn't go far, but it was full-on strawberry taste. Jean planted some more spring onions under our new netting to keep the birds off. I extended the netting around our few runner beans which have had a couple more added. I've learned my lesson here. We only wanted a few plants, but we should have sown many more than we needed.

I watered everything in sight. I fetched watering cans from the site tank that fills (very slowly) from the mains and I also used water from our water butts. These are now down to less than a third full. Not only does this leave much less for the stuff still in the greenhouse but also the water pressure drops as the height of water in the tank falls. The forecast has been unusually inaccurate recently, always promising rain in a couple of days, then nothing actually arriving. With not much water left in our butts we will have to resort to lugging watering cans from the tank which is a tedious and very slow job, but with some of our young plants wilting and onions running to seed we don't have much choice.
Posted by Chris Hill at 16:03 No comments:

We have had more small plants nibbled than last year, so I bought some more netting and tent pegs to protect things. I have decided that for small plants the simple method Ken and Brenda use is perfect, so, in the best tradition of allotments, I copied it. I use some sturdy wire arches over the row and spread the netting over them all held down with tent pegs.

We added some more CDs over our leeks. Some of the smallest leeks have been nibbled so CDs will keep the birds off. CDs will not do anything for our biggest problem - no rain. I know the forecasters are not responsible for the weather but they are responsible for getting my hopes up for heavy and prolonged rain. The ground is very dry to substantial depth. It is not so warm so any water we put on the ground lasts a bit longer, but a really good soak is really badly needed.

Tony has another solution to covering his crops from bird attack. He has made some wooden frames, covered with nets which he has fixed to posts in the ground. These are much higher than Ken's handy work and would certainly take more building, but I quite like them.

We harvested some more rhubarb and spinach. Our next runner beans are nearly ready to go out to supplement the badly eaten beans we have out. Our mange touts are flowering with some proto-pods, I just can't wait for these. Still no signs of blackfly on our broad beans. Our beetroot, parsnips and onions are growing quite well but all need more water than we can give them. A couple of blackcurrants are turning ripe and there is a hint of red on a strawberry. The raspberries are still buzzing with bees and the first berries are appearing. It is especially important that they get water to fatten the fruit.
Posted by Chris Hill at 19:04 No comments: