I had given up on the carrots. I've bought some more carrot seeds to have another go. Today the carrots have decided to show up. I will sow some more carrots as the new seeds are later season carrots so hopefully they will extend the season. It seems impatience and vegetables don't mix.

I have dug over some more of the plot in anticipation of planting out some of the things growing on, mostly still at home. The recent rain has left the soil lovely and crumbly but it has pushed up weeds like mad. I do wish weeds were edible and tasty, but they do make good compost in the long run.

I have sown some runner beans, and two sorts of manges touts. I have some prunings from the hazel trees and I think they will make great pea sticks. I do need to cover the plants this year, the peas especially. Partridges have been seen and already onions across the site have been nibbled. I expect to net over everything and surround stuff with wire netting too.

I have noticed that Ronnie has planted out sweetcorn. I'll see how it does before I plant mine out, which is still a bit small yet.
Posted by Chris Hill at 19:36 No comments:

The courgettes have survived their first night out, under fleece, but the wet, windy and chilly forecast for the weekend is ominous and then it is forecast to get colder!

I'm planning to sow some more seeds at home, I hope it warms up soon.
Posted by Chris Hill at 16:18 No comments:

The asparagus is prolific at the moment. There are new spears every time I look and I can hardly keep up with it. It is lovely, especially the soft tips. I've tried it cooked by searing it on a griddle pad and steamed in a dribble of water, covered in a microwave. Both work well. it goes with fish, eggs and meat and now I'd like to try something else, just for a change.

I think the wet year last year will have helped the asparagus bulk up and it started to show nearly a month late this year, probably due to the very cold March winds, but what every is the cause the crop looks and tastes very good this year. 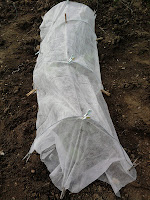 The cold start to the year has held up everything. I sowed seeds deliberately late this spring, but still there are come concerns about tender plants. My courgettes have grown fast at home and have main leaves and even flower buds, but I was concerned about frost so I haven't put them out, until today. The plants look really strong, but one nip of frost and they will be doomed, so after planting them out, I covered them with a fleece tunnel which I hope will protect them enough until the risk of frost has passed. I planted them quite deep and made a little well around them, so when they get watered it flows to the plant - they are very thirsty. I also planted them wide apart, they can be rampant and need a lot of elbow room.

The broccoli is still producing spears, though some are flowering now so I think it is nearly over. It has been really good and I'll certainly try growing it again, though protecting it from pests has been difficult and it is important, having lost two thirds of the plant in a couple of days to pests - probably rats. 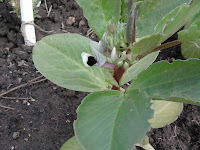 The broad beans are beginning to show the first truss of flowers. They have all survived the wind and chill and are looking good plants. They are getting big enough to think about tying them in to another string support. Leeks in the greenhouse are all doing well, the failure rate so far has been almost zero. No sign of any carrots yet - I may have to sow some more.
Posted by Chris Hill at 16:01 No comments:

Some rhubarb was ready to take today. It looks lovely, but the real treat today was asparagus. The spears were finally big enough to take and many more showing so it could be a good harvest this year. The broccoli is still producing lots of small florets. I watered the asparagus, broad beans and fruit bushes.

I dug over, carefully weeded and finely raked out a bed for carrots. I sowed two rows of seeds with lots of room for more rows, but I need more seeds. I'd like to try some other varieties so I'll see what I can find.

It was another lovely day at the site, sunny, calm and warm. As I dug and weeded the ground it was great to feel that it was warm even well below the surface.

A house just across the street from me is having an extension built and Paul had a chunk of lawn to dig up. He asked if the earth would be useful at the allotments - it is. People now have extra raised beds and all those little sunken corners have been filled in. I fetched a few barrow loads of the rich, loamy soil which I will just use as a mulch to improve a few parts of the plot.
Posted by Chris Hill at 20:04 No comments: