I have struggled with my health all year, so I decided to give the plot so someone else who can look after it can take over.

I hope the new tenant gets as much out of it as I have over the years.

The shed roof is repaired.

This week looks warm and dry, so maybe some more watering will be needed.

The cabbages and cauli have all been eaten by the slugs and snails. Not sure about the best way to replace them.

The peas are through and in a few days I'll sow some more to split the crop. I'll also sow some more of the seed tapes. There are a few carrots now on the first tape, but overall they are a disappointment.

I planted out the sweet corn which looks pretty good. I hope to find a way to keep the rats off it later in the year.

Looks like a good week to sort out the weeds that have sprung up.
Posted by Chris Hill at 18:31 No comments: 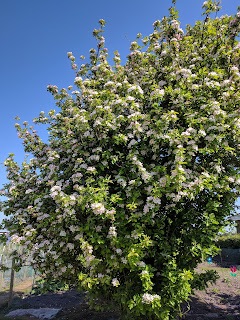 It has been dry, very dry. Everything needs water, so I've been splashing watering cans around to try to keep up. It is never as good as a proper rainy day, but it keeps things from shrivelling up.

I planted a batch of peas today. I plant to plant some more in about two weeks time and again in another two weeks to try to spread the crop over a longer period.

The sweetcorn plants in the greenhouse are looking good. I expect they will be ready to go out in a week or so. I hope frosts are over, but I'll cover them with fleece if a frost is forecast once they go out.

Spuds are all showing well, onions are all looking strong, cabbage and colli all look a bit forlorn - they really need more water I think. Most broad beans are through. The disappointment have been the seeds sown on tapes. None are showing. I think I'll plant some more shortly, but the cold and the drought might have done for them. The fruit bushes are covered with flowers. The apple trees at the site entrance are covered in blossom too as you can see.
Posted by Chris Hill at 11:32 No comments:

I sowed some sweet corn a few days ago and already it has all sprouted, bar one. I've taken the plants out of the propagator and put them on a west-facing windowsill for a few days. If they grow well I'll take them up to the allotment cold greenhouse to harden off before planting out. It seems vigourous as it has all sprouted in less than a week which looks promising.
Posted by Chris Hill at 16:43 No comments:

A really lovely day today, so I did a bit more digging and sowed some carrot seeds on a tape. The plot's looking a bit more tidy. Gary offered to help replacing the felt on the shed roof. It would make the job much easier to have another pair of hands, and he's taller than me. I'll see what the weather is like.
Posted by Chris Hill at 22:16 No comments:

To earth up or not to earth up

It's been lovely for much of the past few days. I've got more of the plot dug over and ready for the off. I planted broad beans and onion sets a few days ago. No sign of either growing yet, but that's not surprising.

Today I set about planting some second early potatoes. The idea is, I think, that the tubers should be about 15cm (6") below the surface when you're done. Most folks seem to agree that spuds need to be earthed up, that is have a small bank of soil heaped up along the line of the planted spuds. I wondered if just planting them deeper would be as good, but it seems not to be so. The tubers grow just beneath the surface and banking them up encourages them to grow in the row where they are easier to find. Every time I grow potatoes there are always a few that I miss that come up next year amongst some other crop I have planted there. I have earthed up the rows a bit and I'll add a bit more as the leaves begin to appear. It is important to keep the tubers covered and out of the light. If they get light on them they go green and develop solanine, which is poisonous.

I also sowed some beetroot and some spring onions. These were both on tapes. I cut a metre off each tape to get some plants started, I'll sow some more in a few weeks to stagger the crop. I've got carrots and midget lettuces also on tapes to try. I hope they work well.

At home I have some leeks pricked out into pots (thanks Louise for the leeks) and I've sown some sweet corn in pots. That is in a propagator and will remain so until the shoots appear, maybe seven to ten days. I bought some early cabbage plugs and some romanesco broccoli plugs which should be ready in the autumn. I'll move them up to the greenhouse soon.

I have a more digging to do and a few jobs to sort out, The shed needs tidying up, likewise the greenhouse, there are some frames that need repairing and a fence post that has broken. Then there's the shed roof ...
Posted by Chris Hill at 15:55 No comments: