Last year when we dug up the parsnips we missed a few. This year they sprouted, flowered and now are covered in seed heads, some of which are ripe.Today I put some of the seed heads into a paper bag and shook them. The result was a ton of seeds and a lot of greenfly and black fly in a paper bag. When I got home I tipped them out to see if they look any good and indeed they do. If anyone has any hints for ridding the kitchen of a mass of black fly and greenfly I'd be interested. 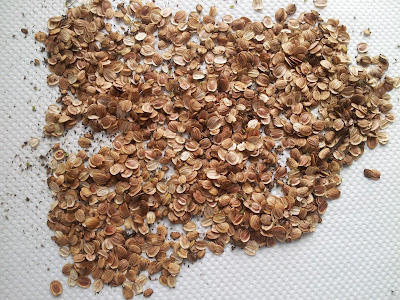 I also did some of the obligatory weeding and pulled a carrot to see if they are ready. The carrot is still rather small, so I left the rest.

The male flowers on the sweetcorn are magnificent, but sadly there are no cobs, not a one. I'm not sure what has happened, other people have lovely looking cobs developing. I'll just have to write sweetcorn off this year. Mange touts have been doing well and still more are developing, Runner beans are slowly developing, rather too slowly for my liking. I'm still taking a few black currants and about half of the gooseberries have ripened and been picked. The raspberries are about done now. All of the fruit has been particularly good, with plump, juicy berries and lots of them. My freezer is bursting.

If only a small fraction of the parsnip seed grows next year it would fill the whole plot.
Posted by Chris Hill at 16:32 No comments:

After some pretty hot weather there has been the usual thundery breakdown and a few days with a fair amount of rain. Today is warm (forecast to be hot later) but the ground is very damp, so great for plants to grow. Decent rain is so much more effective at watering than I can be and it is much less work.

I have tried to tame the grass that grows in from the borders under the fence. Mixed in with it is still some bind weed too. I have resorted to carefully spraying the bindweed with Glyphosate weed killer in the hope of at least keeping it in check.

I took a few phone-photos (i.e. badly framed, badly lit and out of focus) to show some progress. 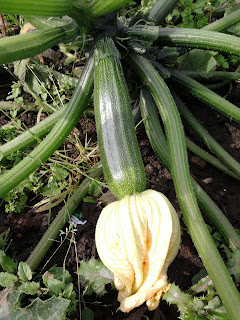 Courgettes are doing well. As always, if they get some sun and water they produce masses of fruit which I like to take when they are quite small. If left they will turn into marrows and the plant will produce a few large ones. If picked they produce loads of smaller ones. 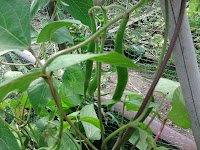 The runner beans are flowering and the first beans are growing. They grow very quickly so they need monitoring often to pick them at their best. If the pods get too long they often become stringy and the skins get too hard. I'm hoping to get lots of these beans this year. 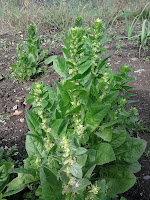 The spinach is a disappointment. I have taken a little to eat, which was very tasty, but the hot weather has made it bolt, which means the leaves lose all of their flavour. 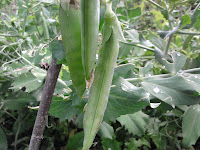 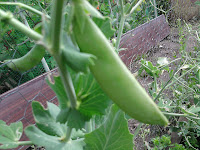 The mange-touts have been good so far and the rain will boost them some more.  There are two varieties and one produces fatter pods which may not be intended to be mange-tout, but they all taste great so I'm happy with them. 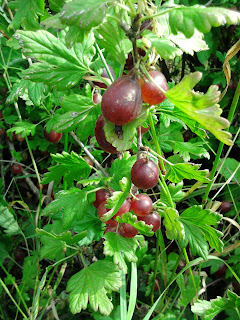 Gooseberries are in full flow now. The raspberries have almost finished, black currants are past their peak and now gooseberries takeover as the amazing torrent of lovely soft fruit continues. Surely the best year for fruit for a long time. These gooseberries are the so-called desert variety, so they turn purple when they are ripe. This makes it much easier to know when to pick them compared to green goosegogs. They are almost hairless, a bit sweeter than green varieties but they still have vicious thorns which need to be grappled with when picking the berries. They are worth it though.

Happy Yorkshire Day.
Posted by Chris Hill at 11:29 No comments: