A good year for pests 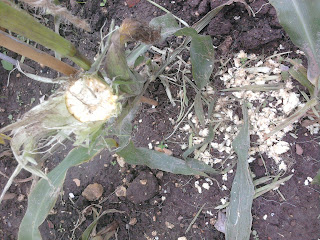 Very fresh sweetcorn is a delight and something worth growing. It seems that others agree. Two of the largest cobs have been partially devoured in yet another pest attack. If this year has been notable for anything it has been for the range of new ways to have our plants eaten by pests.

We have had some lovely sweetcorn this year, and today we took some more. Most of the remaining cobs are small. If they ripen there will still be enough more to enjoy, if the pests leave them alone.

On the rat front, or rather the rats at the back of the plot under the compost bins near the hedge, I have decided to put down rat poison. It is easy to drop it into their hole and cover that with a small plank to stop anything else eating it. All we have delivered has been quickly eaten - I'll see how soon the current batch disappears. Once the rats have been dispatched I intend to find a way to cover the bank they, and before them rabbits, burrow into so easily. Concrete would be effective but not possible, so chicken wire mesh laid across the bank and buried at the edges might be effective. I think I'll dig out the compost bins and lay chicken wire under them too make they whole area hard to use. I'm sure the key is making things difficult or unpleasant so pests just move elsewhere, but when they are resident firmer action is needed.
Posted by Chris Hill at 15:30 2 comments:

More Autumn digging and we're about done. In the bank behind the plot there's a new hole which heads our way. It is freshly dug but looks fairly small - a bit too small for rabbits. Gary found a dead rat, so the hole is probably a rat hole. I need to discourage them, poison them, scare them away or do something to remove them - I'll give it some thought. I had to hack through nettles to get to the field and part of a now-dead elderberry broke off as I pushed past it, so now there is a big gap in the hedge. It is supposed to be a hawthorn hedge, but much of it is elderberry and much of that is on its last legs. I think I'll plant as many hawthorn berries as I can to try to grow a new hedge. Mind you, with a decent hawthorn hedge, how would I check what is digging in the bank?

The shed has a felt roof, and I found part of it on the plot. I climbed up to look and found the felt is torn and has holes in many places, so a new covering of felt is required. Getting the old stuff off will be easy, getting the old felt nails out may be harder and fitting the new felt along the join with the greenhouse, without dismantling the greenhouse roof might be awkward. I don't trust the strength of the roof to sit on, so I will have to work from the edges.

We thought about growing leeks over the winter then forgot. I hope it is not too late to start some now for harvesting in the spring.
Posted by Chris Hill at 16:04 No comments:

We want to move the blackcurrant and gooseberry bushes, but we don't want to lose them. They don't like being moved at all. I have pruned the gooseberry bush today and some of the woody prunings I turned into cuttings and planted six of them in the new spot we want the bushes in. If any of them have taken in the spring, I'll choose which ones to keep and remove the rest. Once the new bushes are doing well (assuming any take that is) we can decide if we want to try moving the original bush or just dig it up. I'm going to repeat the process with blackcurrants in a week or two - they still have most of their leaves.

As well as getting thoroughly scratched by gooseberry thorns I tied in the green growth of the raspberry canes. They have done really well in their new home, although they didn't have much fruit this year they have put out masses of new shoots that should all bear fruit next year. Now they are tied to wires supported at each end by posts they stand a better chance of surviving the winter winds without breaking.

The Autumn dig is under way, with about half the plot dug over and weeded. The small hazel trees around the edge of the plot are now much bigger and some have nuts on them. I'll harvest the nuts when they are ready and then prune them quite hard, which I've done to the ones with no nuts.

Sweetcorn is doing well, with more cobs to eat today. They are unbeatable. The beetroot has finished, the beets have stopped growing, so got composted. The remaining cabbages were full of caterpillars so they were pulled up and composted. The compost bin is quite full and needs turning soon to help encourage the rot. Some of the lovely compost from our bins has helped the raspberries do so well. The rhubarb is dying back, so its leaves and stems will add to the compost too.
Posted by Chris Hill at 17:09 No comments:

A warm, calm day and the plot invited some attention. Lots of weeds came out - we still have too much bind weed. The remains of courgette plants came out which have been worthless producing only two small fruits all year. The sweet peas are over so they came out, with accompanying bing weed. All of the remaining onions were lifted to dry off and I lifted the first parsnip which looks large and very good.

It begins to look like the start of autumn.

More beetroot was ready today and we lifted some onions to dry in the greenhouse. The broccoli has had some slug damage, but should be OK. We took a cabbage which had some caterpillar damage, but the heart looks great. The sweet corn is now in a race against the weather and the shortening days. Many of the sweetcorn stems were falling over, I hadn't staked them this year - I will another year. The cobs are growing but they are not ripe. I hope there is still time for them to ripen before the days are too short and before any frosts. Just a few sunny, warm days might do it.