We've been up a few times over the past week, mostly to harvest vegetables and water the tomatoes in the greenhouse. We have had great beetroot, lots of runner beans, huge savoy cabbages, crunchy spring onions and crisp fennel. Norman on the next plot lifted a parsnip to see what it was like. It was fat but short; we'll see what ours are like in a few weeks. We dug up the stray raspberry canes that had self-seeded outside of the rows. I put some chlorate weed-killer down around the grass edges to stop the couch grass spreading onto the plot.

We have started to think about next year's layout. We will remove the beds and go for longer rows across the width of the plot for most vegetables. We want some more gooseberry bushes and we'll take blackcurrant cuttings to grow more of them. We're going to use the plot we cleared last to grow small amounts of things like spring onions and maybe some other salad stuff.

We need some more horse manure, so we''l be heading off to the local riding stables to get some. It's very handy and free. It made a big difference to the soil texture last year, so I'll keep adding it when we can.

I think I'll extract a summary for the year from this blog, so we know what worked well and for timings of sowing and planting out. This will help to create a plan for next year. Keeping the plan and results seems to be useful, Gary has records for twenty years, but every year is different.
Posted by Chris Hill at 12:03 No comments:

Email ThisBlogThis!Share to TwitterShare to FacebookShare to Pinterest
Labels: plan

We cut down the remains of the broad beans today and gathered the remaining pods for seed. I've spread them out on a shelf in the greenhouse to dry off. There are far too many for us, but someone else might like some. I gave away some fennel and a cabbage to Ken and Brenda and a fennel to their neighbouring plot-holders too. Our bodged support for the runner beans needed a little extra help but is still standing.
Posted by Chris Hill at 17:17 No comments:

Beans are down, but not out 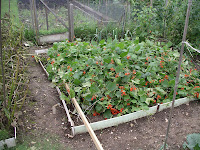 We went to the allotment to harvest some veg, but when we got there we were met with a little problem. The frame I built for the runner beans had been blown over. The plants were just laid over, so they were not damaged. They were covering the beetroot, but it was fine too. The wire guy lines had been pulled out by the wind and the supporting legs had snapped clean off. We stood it up, shortened the guys, fastened them to much more substantial supports and the frame was up ag 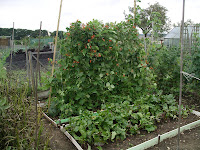 ain. Next year I'll build a more traditional pyramid or two from bamboo or the like.

We took two large cabbages and a good crop of now-upright runner beans as well as a few beetroot, some spring onions and a fennel. We cut back the raspberry canes that had fruited and began to tie in the remaining canes to the wire supports. I didn't finish - I got fed up. I also checked out the broad beans that we had left as seeds for next year. They are not yet ripe or dry enough to gather, so I'll cut them and hang them to dry next time we go. I think that will be tomorrow, just to check those beans.
Posted by Chris Hill at 20:53 No comments:

Pak choi sprouting in the rain

The pak choi we planted has started to come up. If it needs rain it will be happy. We now need to gather the broad beans we have set aside for seeds so they can be dried and stored. We should also prune the raspberry canes that have finished fruiting. So if we can find a few dry hours ...
Posted by Chris Hill at 22:04 No comments:

We popped up today to check things over. The ground was nicely wet; it has rained over the last few days quite a lot. The tomatoes (in the greenhouse) needed watering - they always do. The first broad beans to be planted out have finished some time ago, but the last to be planted out have just produced the first few beans and probably their last too. Staggering the sowing didn't really work, so next year we will just sow them all at the same time.

The runner beans are doing well, we picked enough to make about four meals. We also pulled a couple of beetroot. We've had a few already. They take an hour to boil, but they are really good to eat as part of a salad. There are four large cabbages ready to take with many more to come.

The leeks look great. The stems are fat and lush. I think we will start harvesting them in a few weeks. The parsnips also look lush. I have no idea how big the roots are, but I'm itching to find out. I just hope our sowing and transplanting technique really has worked as well as it looks.
Posted by Chris Hill at 18:40 No comments:

Yesterday we planted out the next batch of spinach plants. We also sowed some pak choi seed directly in the ground. Normally we sow in pots and then plant out when we have plants, but this specifically does not like being transplanted, so we sowed it direct.

Today I measured up the layout for extending the greenhouse and it looks good. Some weeding and tidying up later we picked some runner beans for later.
Posted by Chris Hill at 21:09 No comments:

Do beans go with fennel?

Our sweet peas have finally finished after a great show. We've had loads of cut flowers from them and given loads away. We've had a good tidy up over the last few days, and things look good. There have been even more spears on the asparagus, 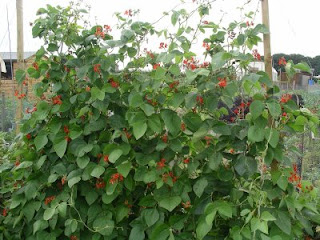 they grow really quickly. The runner beans are now ripening increasingly quickly. It's a bit of a game hunting down the bean pods as they hide behind the huge leaves. There are loads of small pods growing fast and loads of new flowers too.

Our cabbages are filling out nicely too. We've pulled a couple to try and they were very good. We've had mixed messages about freezing cabbage so Jean tried freezing some, and it worked well. Fresh is better, but frozen is pretty good too and certainly not the mush some people predicted.

We took a couple of spring onions to try. They look pretty good, but there are not many of them so I'm not sure they were worth the trouble. 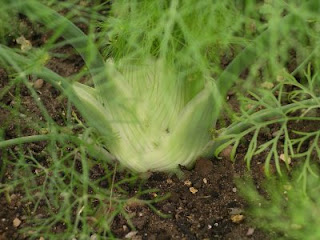 We have been growing Florence fennel as an experiment. The bulbs are beginning to fill out, so we took one home to try. It ended up much too small and very green, rather than the white bulb I was expecting. It tasted good in a salad, so when they are bigger we'll try some more. Gary on the next plot grows herb fennel for its root. I'll give him some of ours to see what he thinks of it. I wonder if it freezes?
Posted by Chris Hill at 15:38 No comments: