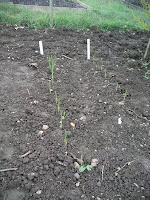 The garlic and the winter onions we planted a few weeks ago have made a strong start, especially the garlic. I expect they will slow down as the winter sets in but while the soil is warm and damp they make on. I covered them to keep the birds from pulling them up. This really only happens with the onions because the garlic is planted much deeper.

The celeriac is slowly beginning to swell - I'm not sure how long to leave it. 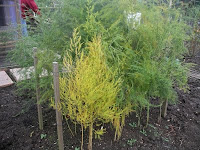 The asparagus is beginning to yellow so that will not be long before it gets cut down for the winter. The tomatoes are winding down with only a few still to finish ripening.

The remaining leeks and parsnips are looking good. 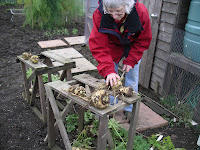 Jean took a few parsnips for soup, stews and roasting. It seems that many of them are stumpy, but that's OK there's plenty of flesh and they're easy it dig up too. Even though they are a bit short they still are still quite fat.
Posted by Chris Hill at 12:16 No comments:

A few of our newly planted garlic cloves have started to grow. A handful of the winter onions have also sprouted.

The leeks that had bolted to flower turned out to be woody, so it is important to look after leeks so they don't bolt. I think some of ours dried out too much and hence they bolted at the first drop of rain. Any more that do bolt will go straight onto the compost heap.
Posted by Chris Hill at 17:15 No comments:

Jean chopped up the remnants of the plum trees we dug up. I changed the layout of the pipes that manage the overflow of our water tanks and lagged the pipes.
Posted by Chris Hill at 22:35 No comments:

A plan for next year

I've drawn up the plan for next year:

We spent a gentle hour tidying up yesterday. there's been some more rain, so the ground was soft and easy to dig. All of the plot that is empty has now been dug over, including the path down the middle. The season is winding down, so we will visit a bit less often soon.

The extra rain had helped two of the leeks to bolt. I think we caught them early enough that we can still eat them - if you leave them in the ground after the flower stalks have shot up they very quickly go woody, even it you cut the flower off.

I covered our newly turned compost bin to help the contents rot more quickly. I also looked at the water pipes between our tanks. I fitted an overflow pipe between the tanks so that they don't just overflow and soak the shed and the stand they are on, but the run-off pipe gets in the way so I'm going to move it before the winter. I want to put more lagging on the pipes too before the winter frosts.

We've been working on the layout for next year's planting. When I've drawn it up I'll upload it. We had a plan for the last couple of years and it certainly helps, but there are always changes as the season goes on.
Posted by Chris Hill at 11:17 No comments:

We popped up to the plot to see how things are and to turn the compost. We have two compost bins - received wisdom says you need three, but space was tight. I made the bins from uPVC planks that would be used for fascias and soffits. There were surplus and I don't expect them to rot for a while. One bin has been steadily filling with all the innocuous green waste. The other was about a third full of the compost that our local council gave away. This is the contents of green-waste bins that has been rotted down at high temperature. The results looked still a bit coarse, so we have rotted it down a bit more. We have emptied the council compost and turned the green compost bin into the other. At the bottom was some promising looking stuff. Next spring I expect we'll have some really nice compost, with a mixture of horse manure, council waste and our compost bin.

A few more beetroots were ready for boiling, so we brought them home. A stray spring onion turned up so that came home too. The leaves of the squashes have been dying back, so we decided to harvest them. There were six decent squashes which look good, though one had split a bit. We'll see what they taste like, and even how exactly is the best way to cook them (ideas anyone?)
Posted by Chris Hill at 15:41 No comments:

Spring onions are over

It very windy and a bit wet, but not enough rain to be useful. We took a few tomatoes, a couple of courgettes and the last bunch of spring onions. They have been a great success and are firmly on the list for next year. The courgettes are slowing down, so they will be done before long, and as the autumn seems to be setting in the squashes will probably need harvesting too. There's still quite a lot of beetroot growing, but that too is slowing down, so I'm not sure how much will be big enough to harvest, but we'll just leave it and see.
Posted by Chris Hill at 14:09 No comments:

We went to dig some fresh leeks today. They are beautiful, crisp and delicious, see what you think: