Rabbits seem to have got a taste for our leeks. Even though I repaired (bodged) the fence they found a way in by burrowing under the shed, which forms part of the rabbit defence. I want to repair and alter the fence, but the ground is a quagmire.  Most of the snow has melted, but the ground is frozen about an inch down, so the meltwater can't drain away.

We took some leeks, with a struggle, but the parsnips were frozen in and will have to wait. The winter has only just started and already the plot is a muddy mess.

The rent for the plot is due. This year it is moving to January so that anyone taking over a plot will be able get it ready for the spring, a good idea I think.
Posted by Chris Hill at 16:42 No comments:

The weight of the snow on our fence brought it down, the fence post was already weak. As some of the snow melted and revealed the leeks the the rabbits sneaked in and nibbled the tops of them. Yesterday I propped up the fence to keep the hopping nibblers out.  Jean harvested some leeks and parsnips. Only the tops of the leeks were eaten so the rest will be fine.

There's still more leeks so they will last into next year, just. The parsnips were awkward to find in the snow, large and a bit woody in the middle. The ground was soft under the snow, but now the hard frost has set in again and harvesting without damaging becomes harder.
Posted by Chris Hill at 16:31 No comments:

It's now two weeks since the first snow fell and there has been no real thaw at all. We ventured up to the allotment passed the chunks of ice dug from the road and piled onto the footpaths. The diggers were probably well-meaning but they certainly have not done us any favours. The piles of ice, well over a metre high, will take ages to melt, the compacted snow was fine to drive and walk on and now some parts of the road are cleared and some not there are four inch steps from one to the other making driving difficult and walking a nightmare as you are forced onto the narrow strip of cleared road because the rest is covered in jagged mountains of ice. 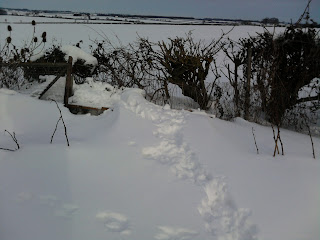 At the allotment there was only one other set of footprints in the snow, heading to Norman and Sue's plot. We carried on past to our plot. The fence in one corner is down and the foot prints show rabbits have ventured into our plot. We entered the same way as they had rather than dig out the gate. At the back of the plot the snow had drifted slightly, engulfing the fence and making a route for more rabbits to enter. They seem to have just had a look rather than eaten anything here, though on one of the other plots they have dug under the snow to get at crops that had not been gathered. 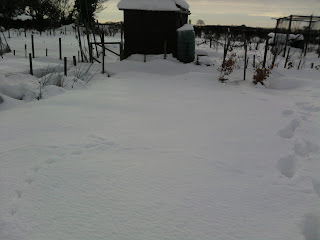 We had hoped to dig some leeks but they were under a deep mound of snow, you might just make it out in the middle of the picture. If we had uncovered some we would have laid them open to rabbits getting at the rest so we left them alone. The blanket of snow, which is about 45cm deep, will hopefully be protecting them from the worst of the frost and from hungry lagomorpha.

A thaw is forecast, so we'll need to repair the fence quickly when we can get to it.
Posted by Chris Hill at 11:59 No comments: