The forecast cold snap seems to have passed us by and April is almost upon us, so the next batch of seeds have been sown. Red cabbage, spinach, beetroot, peas and mangetout have all been sown two-to-a-pot. They have all gone straight up to the greenhouse along with the potted leeks, which are doing well. Another small batch of leeks have been sown too to top up the numbers. They will need to be brought on at home before they are potted up and ready for the greenhouse.

The broad beans and parsnips in the ground are doing well. The blackcurrant and gooseberries are coming into leaf. The winter onions and garlic are doing well too.
Posted by Chris Hill at 12:21 No comments:

Sweet peas are up

The warmer weather seems to have nudged the sweet peas into germination. Their ground is ready for them to move in as soon as they are big enough, as is more of the plot.  We did some more digging yesterday in a dry spell. There is still some digging to do and some weeding around the fruit bushes.

I made a frame to help keep the birds off our growing vegetables. I want a few more of these frames yet.  They are easy to make and they should work well. Like all the best ideas I pinched it, in this case from Tony. It is just a rectangle of wooden battons screwed together with some kind of netting fitted to it. This time I used chicken wire, but the last two were a plastic mesh. They have little plastic feet so the wood doesn't stand on the earth and rot.

We bumped into Gary who was thinking about planting his onions and potatoes. The forecast for next week is colder weather again, so I think I'll wait and see.
Posted by Chris Hill at 18:23 No comments:

The digging is nearly done. There are a few bits left to dig and there's still some weeding to do where we don't want to dig deeply, such as between the fruit bushes. It feels like the bulk of the work is over. 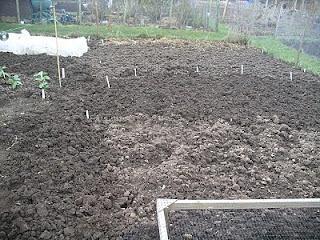 The white markers are there to lay out the plot. I have been working out what will fit where.  The general layout is still what we decided last autumn, but I still need to work out how many plants we want in each area. We have about 100 leeks started and we could fit in about 160, so we will sow some more.

We want to grow carrots this year.  The carrot plot is the one part of the main area that has not been dug over. It seems that to grow carrots we need to have very finely dug soil and we should cover them with fleece over hoops.  We have covered our parsnips like this (the white tent in the top of the picture). We may need some more hoops and fleece. We will dig the carrot patch at least twice to get it fine, and do so when it is quite dry.

Any suggestions for growing carrots are welcome.
Posted by Chris Hill at 16:39 1 comment:

The digging continues. The back of the plot has not been properly used so far. We grew some tomatoes there last year, but they got blighted.  We've grown sweet peas and spinach too, but they have always been a bit of an afterthought. This year we want to use it for spring onions and beetroot. I've dug some of it, but there is still more to do.  The soil is light, but much richer than it was thanks to the muck and compost we have added, especially over the winter.

Jean dug a huge chunk of the other end of the plot, so we have the space we need to plant peas and onions as soon as we're ready. There were some weeds in both parts that we dug, but not too many, and the more we take out the less they get a hold.

I fed the asparagus with a small amount of blood fish and bone. We are expecting some rain over the next few days so it will get properly washed in. The first spears should be appearing in the next few weeks.

A bit of a tidy up and we were done - until we're ready for more digging that is.  There's probably still about half of the open parts of the plot to dig and then there's the weeding around the fruit bushes ...
Posted by Chris Hill at 21:30 No comments:

And now, the parsnips

Another warm, dry day so we planted the parsnips. Most of them had roots showing at the bottom of the tubes, so they were ready to go out. Just to help them on their way I put up a set of fleece cloches to keep them cosy.

We seem to be getting on with our plot, other people seem to be holding back in case the icy breath of winter returns. They are digging the land, but not putting anything out. Now, we might be jumping the gun, so we'll see.
Posted by Chris Hill at 16:45 No comments:

Another session of digging means we now have more ground ready for planting.  The broad beans have gone out. I put a little stake next to each plant to help support them when it gets windy. I added a row of CDs dangling as a deterent to birds, especially the masses of pigeons. 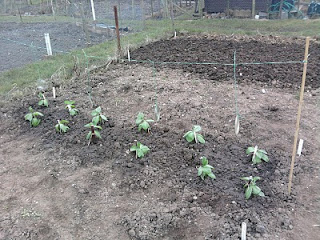 There were a few other people there too, making the most of the better weather. The whole site is getting tidied and dug over ready for this year's plants.
Posted by Chris Hill at 16:16 No comments:

The ground is finally dry enough to dig. Gary put Rob's Rotovator to work over the weekend. It looked good so we ventured up to turn some of our plot. I hand-weeded the asparagus patch to get that into good fettle before the new spears appear. Jean turned over the broad bean patch. That needs to be ready because the beans are nearly bursting their pots and need to be out very soon.

We tackled the potato patch too.  The soil is much too cold for potatoes yet, but it is weed free and manured.  The seed potatoes are still not chitting, so there is no hurry.  Jean also turned a little bed for the sweet peas.  That had the newly arrived cow muck on it and proved to be an awkward thing to dig in. There's so much straw in it that is is difficult to turn over.

Finally I took a look at the salad patch, which has had a lot of manure on it over the winter.  It was very sandy soil but now it seems much richer and has more body - just what we want.
Posted by Chris Hill at 12:06 2 comments:

Today we ate our last leeks and broad beans from last year's plantings. Delicious.
Posted by Chris Hill at 20:41 No comments:

Jean planted some sweet peas and tomatoes today. We wanted to take the sweet peas up to the greenhouse. When we got to the site there were quite a few people there, great to see. We collected some of the manure that Jim had had delivered and spread it over some of our plot.  Some of the horse manure that we had spread in the autumn was still lying on the surface.  We had covered part of the plot rather too thickly, so we moved some of the excess to where we plan to plant potatoes. We removed a few weeds too, but the ground was still very wet and sticky.

We put the sweet peas in the greenhouse, where the parsnips are flourishing and the broad beans are getting ever stronger. The weather forecast for the week is cold, but fine and dry.  This might be enough to dry the plot enough to dig at least some it.  If so, then we will be able to get the weeds out and the broad beans in.
Posted by Chris Hill at 21:41 No comments:

Parsnips and a load of work

The parsnips in their cardboard tubes are thriving, so we took them to the allotment greenhouse. Most of the tubes have a young plant in it so they need to be out in a cooler place to stop them romping on too far.  In a few weeks, weather permitting, they will be in the ground, tubes and all. 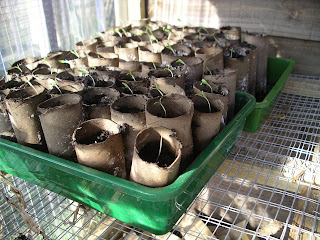 The greenhouse is untidy because we used it to store stuff over the winter. When the weather warms a little more and there is a less chance of frost it will get a tidy out and some stuff will go back outside.

Rob was there making a start rearranging some of his plot.  He dug out some fruit bushes last year and wants to extend the fenced, rabbit-proof area for more vegetables. He also has some heavy-duty pallets to make a stand for his water butts.  Its good to see people about again after the winter. 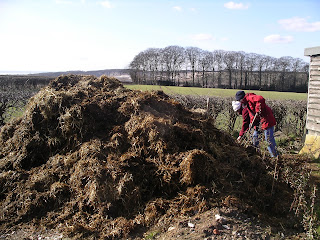 Rob pointed out that Jim's friend had just delivered a load of manure onto the car park at the Quarry End. Jean helped Rob move some of the muck that had stayed onto George's newly planted hedge beside the car park. The muck looks to have a high proportion of straw - it was from cattle sheds.  It should rot down well.  I think we'll use a few barrow loads to suppliment the horse manure we got last autumn.
Posted by Chris Hill at 15:55 No comments: