I planted four rows of onion sets a few days ago. Since then it has been warmish, with a couple of cold, but frost free nights and one day with a lot of rain.

I finished digging over the ground and pulled up some purple sprouting broccoli that were badly eaten and not producing any florets. The few remaining ones don't look good either.

The cabbage and broccoli sown at home are looking strong. The broad beans sown at home have all sprouted and I've taken them up to the plot to harden off in the cold greenhouse. The brassicas will follow as soon as they have their first proper leaves.

I sowed some leeks in a tray at home and the usual hairpins are pushing through the soil. A few have straightened up often with the seed case on the end of the green sprout which looks like a little hat. They will need potting on in a couple of weeks or so, as soon as they can be handled.

Today I've sown some sweetcorn, with some left as a backup, and some butter nut squash, again with some spares as a backup. I'll certainly sow more sweetcorn even if this batch all germinate but staggering it a bit might spread the crop a bit. I really like very fresh sweetcorn but when it all ripens at once it is too much to handle.

I have potted many of the flowers into small pots and today I sowed lobelia and asters which both need some heat to germinate.
Posted by Chris Hill at 16:42 No comments:

I decided to sow some spring onions and beetroot today. I sowed a short row of each with more room to sow another couple of rows of each to try to stagger when they will be ready to eat.

The parsnips look OK after being planted out. I watered them and watered the seeds I sowed too of course. I snapped a few pictures:

Another sunny day tempted me to plant out the parsnip plants. I hope it's not too early. They looked good in their paper tubes but in the ground they look very small and vulnerable. I turned some more of the soil so there's probably about a third of the plot still to go. While it was a nice day I decided to bank up the potatoes which should help them stay safe from frost.

I have some cabbage and broccoli sown at home in pots and I sowed some lupins and calendulas too.
Posted by Chris Hill at 18:00 No comments:

Too early for earlies?

I dug some more of the ground over today and decided to bite the bullet and plant my early potatoes. I've planted a row of first earlies and a row of second earlies. I hope it's not too soon. They will be fine underground and as the ground dries and warms they should grow, but if they surface and there is a frost they could be badly set back. I haven't banked up the tubers yet so the moment a leaf appears I'll pile up soil on the row to help protect against frost and give more space to the new spuds to grow in.
Posted by Chris Hill at 16:19 No comments:

There has been a lot of rain (and some snow) in the last week and a half, but now the forecast is set fair. I decided to sow broad beans today. I had a discussion a few days ago where Dave asked what I do if things don't germinate. My answer about broad beans is that they are tough as old boots and always most of them grow. Today I had second thoughts. I decided to have a bean race, sowing two thirds of the beans direct on the plot and the remaining ones in pots at home. I think the ones sown in pots will probably germinate quickest, but the shock of planting them out later may hold them back, so which ones will win?

I also hand-weeded the asparagus plot, which should be showing shoots soon. One thing I quickly noticed is how much warmer the ground is from a couple of weeks ago. It must be time to get going now.

I have potatoes chitting at home, some first earlies and some second earlies. I want to get them planted in the next day or two, they are all ready.

It looks like spring is about here, it certainly felt like it in the sun on the plot today.
Posted by Chris Hill at 21:18 No comments:

I've started to turn over the ground on part of the plot. I want to sow some broad beans which will be about ready to grow now. 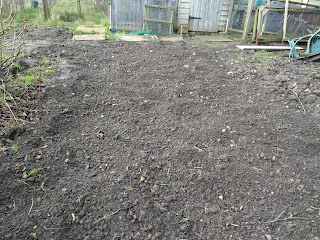 I have only turned a small patch so far to be ready for the beans. However the winner of the prize for most ready for the Spring goes to Gary Charles, as you can see below. 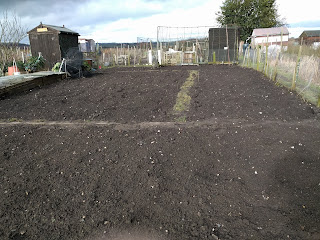