Tonight the first hard frost of the season is forecast, so today we went to make sure nothing would suffer from it. The plants still in the ground should be fine - we took a few leeks, but they were for us not to keep the frost from them.

We have no need for any water now until the spring. I disconnected the tap and unscrewed it from the side of the shed. I set it up with this in mind. There is a stop tap in the greenhouse and the pipe that connects the tap can be unscrewed from the stop tap. We put the tap and its pipework and the hosepipe into the greenhouse.

The water tanks, which are completely full, have plastic bottles in them. The bottles are part filled so they float low in the water. They are there so that any ice in the tank can crush the bottles not crack the sides of the tanks. Now the frost is less likely to do any real harm.
Posted by Chris Hill at 22:22 No comments: 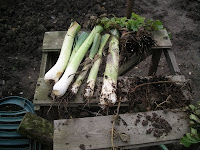 A quick visit today replenished our supplies of leeks. We've now used about a third of them, though we're using the biggest first so some of the later ones won't go as far. The ground was very wet, so we tried to keep off it as much as possible, walking up the side of the plot rather than the middle; this is where the path will be next year.

It has been wet and windy over the last few days and the winter onions were looking a bit battered, today though they have all recovered and the garlic is looking really good. We didn't need any parsnips, but we decided to pull a couple of the celeriacs. 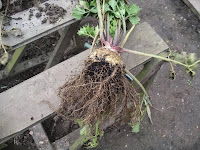 My allotment book by Carol Klein says they should be harvested from mid Autumn to early Spring and they should be between apple and coconut sized. We took three, two smaller (apple) sized and one a bit bigger. They have a small amount of canker on the outside, just like some parsnips, but the flesh seems fine. They smell wonderfully of celery. Now we need to see how we like them, lightly boiled with a bit of butter added, mashed with potatoes or raw in a salad.
Posted by Chris Hill at 15:46 No comments:

I wanted a bit of fresh air so the allotment beckoned. Jean tidied up the tomatoes in the greenhouse. I think they have stopped ripening for a while, but we just left them. Jean picked the dozen or so fruit left, some are showing some sign of ripening, and brought them home to leave on a window sill. The spent compost all went on the plot, with the old plants added to the compost heap.

I pruned the gooseberry and black currant bushes. The thorns on the gooseberries really mean business, so I carefully thinned the bush to let light and air in for next year. The currants are more benign, they needed the old wood removing and any low or crossing branches removing. They all look better for pruning. It was a clear, crisp, very still afternoon, so the smell of black currant wood was especially strong and very pleasant. Maybe black currant pie from the freezer later.
Posted by Chris Hill at 15:34 No comments:

We had a tidy up today - it seems to be the season for it. There was a pile of rubbish to get rid of, so we took it all to the local tip for recycling or disposal. There was some wood we used for small raised beds, a pile of old canes and other wood offcuts, the remains of the plum trees we pulled up and we took some gravel and soil from home too.

The ground is very sticky, we tried to stay off it as much as possible. Last year we had a quagmire because we were rebuilding the greenhouse, but this year we should only need a few brief forays to dig up leeks or parsnips so the mud can stay where it belongs and not get hauled home on my boots.
Posted by Chris Hill at 18:30 No comments:

We popped up to the plot to do a few jobs yesterday. The small heap of horse manure we collected from the local stables has rotted down a bit, so Jean spread that on the most needy area. We would have liked much more but we were too late, it had been spread on the fields. Next year I will collect some much earlier and store it to rot down longer. She also used some of the composted waste from the council, it all helps. I cut down the asparagus. It needs to be cut down to about an inch above ground when the fronds have turned yellow, which they had. Next year we will get a full crop. The wire frame that supports the fronds needed a repair, I might well need to replace some of it next year. That could be the prompt to make a better frame to support the fronds more evenly, we'll see.

We took some leeks and parsnips too. Another leek had a flower spike, so that just went straight onto the compost heap. The leeks which were planted a bit later have begun to fatten up a bit, and we still have loads of bigger ones to take yet. The parsnips were smaller than last year, partly I think because we didn't water them enough. They are still good to eat - stews just wouldn't be the same without them.
Posted by Chris Hill at 11:59 No comments: