I write two blogs, one about openstreetmap and one about our allotment. Today I decided to post the same entry in both blogs because I surveyed the plots on our small allotment site. You can see the results here: Allotment map.

More detail is still possible, more sheds, the position of the water butts, and perhaps the plot numbers, but the detail of which crop is where I'll leave alone.
Posted by Chris Hill at 16:23 No comments: 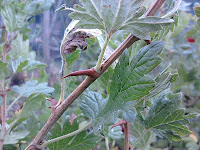 Gooseberries are mixed up fruit. Not that gooseberries think of course, but evolution and the hand of breeders have still left them mixed up. Soft fruit is all about attracting birds and animals to eat the ripe fruit to disperse the seeds, but gooseberries don't seem to get this. They produce succulent, delicious fruit, in our case purple dessert berries. You watch them slowly swelling and eventually ripening ready to pick but the bush has other ideas. It defends the fruit from all-comers with dagger-like thorns hidden under the leaves to assail you as you reach for that juicy berry. They scratch and stab you, they tear at your clothes and leave chunks in you to remind you later that you stole those berries. 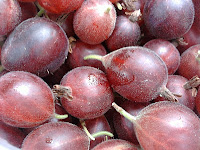 Is it worth this attack to get at the fruit? Oh yes. They are well defended but the assault is well worth it. So maybe the gooseberries are mixed up, but they are delicious too.
Posted by Chris Hill at 11:22 1 comment:

Email ThisBlogThis!Share to TwitterShare to FacebookShare to Pinterest
Labels: gooseberries

The courgettes are still going strong - there are going to be courgettes given away up and down the street. The beetroot are also growing well, with a few getting to the size ready for us to use. The onions which we took up are dry now so they are at home now. 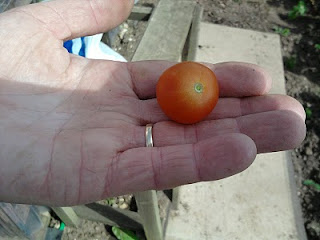 Another milestone was our first tomato of the year. One small niggle is the asparagus. We purchased the plants as only male ones. We don't want the plants to produce berries, both because we want the plants to fatten the crown for next year and not waste energy making berries and because if any of the berries ripen and fall they can crowd out the existing plants. Unfortunately one of our plants is female and producing berries. Today I pulled off some of the berries before they ripen and I'll pull the rest off soon.
Posted by Chris Hill at 20:23 No comments:

See what the rain does

Today's harvest was nearly half a kilo of raspberries, a half kilo of wonderful gooseberries and three large courgettes. The first tops of the summer onions have turned, so I pulled these up and put them to dry in the greenhouse for a day or so. They are firm and a good colour, but they are smaller than last year. 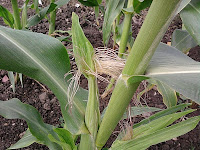 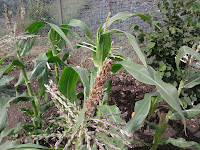 We've had some rain over the past few days. The ground is not soaked but it all helps. The older sweet corn stems have responded by throwing out flowers. The male ones are dancing in the breeze on the top of the stems and the female ones are just showing on side shoots. The sowing in batches looks good because not all of the plants are ready together.
Posted by Chris Hill at 12:28 No comments:

We made a quick visit today and came away with some new potatoes, some mange touts, some sweet peas and our first beetroot of the season.

We have left the beetroot to grow into bigger beets this year, more like tennis balls than golf balls. There looks to be about a dozen that are about ready, but we took only the biggest three to try. They are currently boiling in the kitchen and smell pretty good.
Posted by Chris Hill at 12:16 No comments:

Finally there has been some rain and the temperature has dropped. Today it is very windy which is due to drop later today. I'm hope our sweetcorn all survives the blast. Jean has been round with a hoe to combat the weeds that the rain has brought out.

Our beetroot has been quietly growing, benefiting from the water we gave it earlier in the year. Some of the earliest batch should be ready to take soon. We have allowed it grow much more this year to try to get bigger beets, some of which we will freeze.
Posted by Chris Hill at 13:31 No comments:

The very dry spell over the first half of the year has had a bad effect. The broad beans have finished. It was a bit of a surprise but the plants are dropping their leaves. I've gathered most of the pods, which was nearly a kilo, and left a few to ripen for next year's seed if they will.

The raspberries are ripening quickly. They are juicy but very small. There's still some more to come. The blackcurrants are all gathered in, there was about four kilos in all. I dug some more potatoes, which look good but there are not many to each plant, again they needed more water. The peas are over. I picked a few pods but the plants are shrivelling up. The mange touts have continued to produce more pods than we can eat, so more go into the freezer. The courgettes have produced another fruit today.

The dry spell is forecast to end this coming week. I really hope so.
Posted by Chris Hill at 19:36 No comments:

The flow of harvested fruit and veg continued this morning. We took about 1kg of blackcurrants, 350g of raspberries, another batch of mange touts and our second harvest of broad beans, which, out of their pods, was about 500g.

The blackcurrants continue to look great, fat and juicy and they smell wonderful as you pick them. The raspberries are rather smaller than usual, but juicy all the same. I think we have taken about a quarter of the broad beans, but I need to leave some of the best pods on the plants to ripen into next year's seeds.

Mange touts are hard to harvest. As I stand over the plants looking down on them the pods are thin, match the colour of the rest of the plant and hang down often under leaves. As we leave the plot I often notice a few pods that I have missed. Today I leant over the fence to pick a couple and broke a fence post. I'll have to replace it now but I might take the chance to change the fence and gate layouts.
Posted by Chris Hill at 14:04 No comments:

I have been trying to decide when to dig up some of the potatoes. They have been in the ground for twelve weeks, but the first few weeks were very cold and the whole twelve weeks have been very dry. Today I dug a single plant and found a collection of smallish tubers. They were very good to eat, so I'll look forward to having some more and probably plenty to give away.

We also took out first courgette today. There's a lot more to come, but they have made a bit of a slow start. They will need watering as there is no prospect of rain. I took a lot more mange touts and some peas too. There are still more pea pods forming, but the mange touts look as though they may be slowing down. The last winter onion came up today and went into onion bhajis for lunch.

Jean picked nearly a kilo of blackcurrants and I picked over 300g of raspberries. This year the rasps are on half measures because we dug up and gave away about half of the canes. We will still have loads for us and some to give away.
Posted by Chris Hill at 18:34 No comments:

Yesterday we harvested about another 800g of black currants. There's so much fruit to still fully ripen, it is hard to see that we have taken any fruit. The strawberries are over and have been disappointing. They just didn't get enough water. At least the fruit we did get were very tasty. The first of the raspberries were ready to pick. They are surprisingly plump and juicy. I have watered them a bit, I would have liked to given them some more.

We took lots of mange touts, most of which we froze. There were some peas too. They are sweet and good to eat, but there are not very many.

Today we took some more mange touts, some made their way into an omelette for lunch. A few more peas were ready too. I cut another batch of sweet peas, with some of the darker flowers opening up now. Jean planted the last batch of beetroot. The first batch is beginning to form beets so I hope it will be ready soon to try.

I took the first broad beans today too. There seems to be lots to pick, but only a couple of handfuls were firm enough to be ready to take. I watered the courgettes which are beginning to produce small fruits. They are also putting out plenty of new leaves and spreading as I expected they would. We have four plants, based on last year that is probably twice as many as we need so there will be lots to give away.
Posted by Chris Hill at 19:29 No comments: