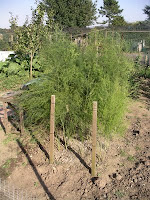 More weeding and digging in the sun today. The runner beans have finished so I dug them up and dug over the ground ready for moving the strawberries into that plot. There are still lots of weeds to pull up. The ground is dry and hard so weeding is difficult. The asparagus is still strong. A few more spears keep growing but in a few weeks it will start to die back and be ready for pruning to the ground for the winter. 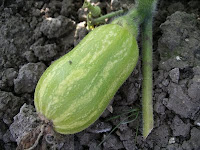 The autumn and winter crops are coming along nicely. The squashes are a bit of a mystery to me. I'm not sure when to harvest them. There are a number of new fruits which are green and stripy whereas the oldest ones are firm and yellow. 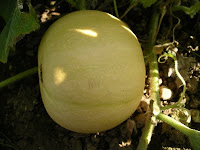 I think the yellow ones are probably ripe, but I'll leave them for a bit longer, especially while it is warm to help them fully ripen. They have been easy to grow and I'd recommend them as a plant, but as yet I don't know how they cook up, nor how they store. 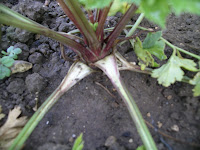 The other crops that seem to be doing well are the parsnips and celeriac. They look somewhat similar, their leaves are similar shapes and the way they grow from the root look similar. It's the first time we've grown celeriac, and so far it looks promising. We got the plants from Rob in the plot next door. He sowed a packet of seeds and they all came up. He's planted them of course and a couple of other people took some of his plugs and they are all doing well. 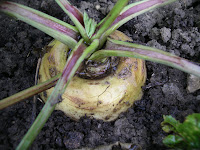 Our parsnips are the result of our modified planting technique. Last year we planted the chitted seeds in fibre pots. When the plants were ready for planting out we cut the bottom off the pots and planted them pots and all. This was to try to get the balance right between not disturbing the root yet planting out viable plants. It nearly worked, the plants all grew well but we did get stunted roots, probably because we did disturb the roots. This year we sowed them in tubes, so there really was no root disturbance, but as yet we don't know if it worked. They do look good though.
Posted by Chris Hill at 18:00