I made a few frames in the past because I thought they might be useful. They are simple things, wooden rectangles with reinforced corners covered either with plastic mesh or chicken wire. They have short plastic legs screwed the ends so that when the frames are stood on their edge they are resting on the plastic legs, which can be pushed into the ground to help support the frame. The plastic doesn't rot. When two frames are stood either side of a few rows netting can be spread across the top and the ends to keep the plants safe inside. Clothes pegs are very useful for holding the netting or fleece strung over these frames. Two of the frames have the legs at right angles to the frame so the frame is supported 15cm above the ground by the legs so crops can grow under them. The netting on that wraps over the edge to reach the ground.

When I made them I thought they would be useful and I was right. Of course they were not my idea - I copied the frames other people were using. I added the legs as my contribution to the evolution of the idea. Currently the two flat ones are covering the strawberries and some of the beetroot, the biggest two are protecting some leeks that would otherwise be outside if the fence and likely to become rabbit food. Another two, with the addition of some plastic netting,  are keeping the birds off our peas. The remaining two were being used to protect the French beans, but they are now big enough to not need defending, so I moved them to protect the carrots. 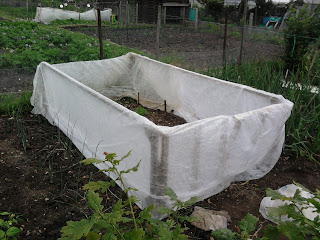 Yes, we do have some carrots! I have three short rows of them and room for two more rows which I will sow shortly. The carrots need to be protected from carrot fly, so I have used the frames to hold up a double layer of fleece which should do the job. Having struggled to grow carrots in the past I don't want to lose them to the dreaded fly.

We have been picking strawberries and blackcurrants in the past week, with a good crop so far of both and more to come. Gooseberries are ripening slowly, though some are splitting after the rain as they swell too quickly. The broad beans are stunted, for the second year. We will get some beans but not as many as I would like. Next year I'm going to research some different varieties. Courgettes are growing, though a bit more slowly than other people's. Our sweetcorn is looking good too. French beans have flowers and the leeks are growing well. Our winter onions and garlic both look promising. We have been nipping off the garlic flowers so they put their energies into growing the bulbs. A few onions have bolted so we ate them straight away. The spring onions are doing well, growing them in pots and planting them out in small clumps seems to work well. The summer onions look great with only one flower so far. The peas were set back by the partridge eating their leaves, but they are growing well now, though no sign of flowers yet. Sweet peas have their first buds showing.

Some decent rain has finally halted our march between plot and tap and we can now look forward to some great vegetables.
Posted by Chris Hill at 15:08