This afternoon I planted out some mange touts. They were sown late, have grown slowly and look strong, but not very big. Following previous years were peas were scoffed by something or other in the blink of an eye, I put up some frames to grow the peas in. I kept the prunings from a hazel tree as peas sticks. 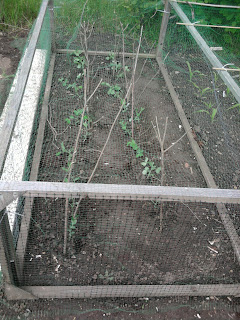 Just before I set off for the allotments the heavens opened and a downpour delayed me. While I was there there were a few spots of rain, but I got the peas out in the dry. I then set about the pea sticks which I thought would be a moments work, but as the rain started to bucket down it seemed to take ages, so I took refuge in the greenhouse. After a few minutes the rain eased up a bit so I finished the sticks, covered the frame with netting and headed for home. As I turned the key in the door at home the rain stopped, the sun came out and I needed a towel.

A bit later I realised that in my haste to finish I had not clipped the netting to the frame at one side, so I popped up again (in the dry) to do just that. As I walked past Tony's plot I heard a rustle and saw a small rabbit on his plot, inside his fence. As I moved towards it, waving my arms, it calmly jumped over his fence and ran off from the site across the road. The fence is about knee high but some of my fencing is only slightly higher and its effortless leap would easily have cleared by fence too. This is an bit of a surprise and I might need to think again out fencing to keep
Posted by Chris Hill at 20:05