Not the biggest harvest ... 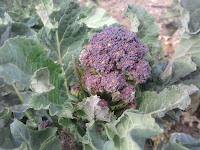 ... of broccoli, but it is the start of my long-awaited season. The spears are small and I'm not going to get fat on it, but it smells great and later I'll see how it tastes. There are other spears forming lower down the stem, so if I take the top ones that should encourage others to fill out too. If they all come to something there should be a decent harvest and one that I had given up on so rather unexpected. I have rechecked the rabbit hole and it remains filled in, so it must by now be unoccupied. The photo is looking down at the back of a compost bin with the heavy iron bar holding down a large wooden block where the hole was, with a part brick also standing by make digging harder. I will keep checking and keep retaliating if there are any signs of digging or other activity. My aim is to persuade any pests that my allotment plot is not a pleasant place to be so they go elsewhere, sorry to my neighbouring plot-holders. 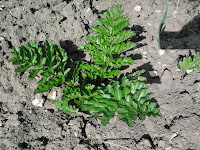 It seems we did not dig up all of the parsnips over the winter as a couple of them have sprouted new tops. I don't think they will be worth keeping so I'll dig them up as I turn that part of the plot over prior to planting.  Many of the plots are being prepared for planting, with onion sets being planted on a few plots. My broad beans in the greenhouse are romping away and I need to plant them out, but strong winds today and for the next couple of days are making me wait, they would just snap in the wind for now. I'll get them out at the end of the week and stake them I think.

I have potted on the first batch of sixty leeks and another batch is on the way. I've sown courgettes and spring onions at home too, but the parsnips chitting has been a complete flop. I'll try again - I do want some parsnips on the go.

The next job is to make a carefully prepared carrot bed ready for sowing carrot seeds direct - I might have to sow parsnips direct too at this rate.
Posted by Chris Hill at 16:54